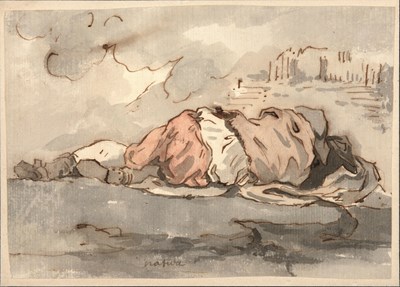 Study of a Sleeping Youth, Seen from Behind Sold


Augustin Pajou was an exceptional draughtsman and produced highly refined drawings in red chalk for his sculptural works, as well as a number of finished composition drawings intended for collectors. In addition, during his period of study as a pensionnaireat the Académie de France in Rome between 1752 and 1756, he made numerous pen and ink drawings after Greek and Roman antiquities in both Rome and Naples, as well copies after works by Renaissance and Baroque masters. Two albums of such drawings by Pajou, numbering over 280 sheets, are in the collection of the Ecole des Beaux-Arts in Paris, while a third is in the Princeton University Art Museum. These three albums, as well as another, also dating from the artist’s Italian period, which was with the Galerie Cailleux in Paris in 1995, account for a large proportion of the artist’s extant output as a draughtsman. While in Italy, Pajou also made a handful of drawings of scenes of everyday life, of which the present sheet is a particularly fine and charming example.

Provenance:
From an album of drawings by Augustin Pajou, assembled by the artist, which was probably one of three albums which passed to his son, Jacques-Augustin Catherine Pajou, Paris
Probably his estate sale, Paris, 12-13 January 1829, lot 110
E. Parsons and Sons, London, by whom the album broken up and dispersed
Sale, London, Christie’s, 15 February 1919 [catalogue untraced], bt. Oppé for £3.10s
A. Paul Oppé, London
Thence by descent until 2006
Oppé sale, London, Christie’s, 5 December 2006, lot 83
Galerie Paul Prouté, Paris, in 2008
Josiane Laporte, France.

Study of a Sleeping Youth, Seen from Behind