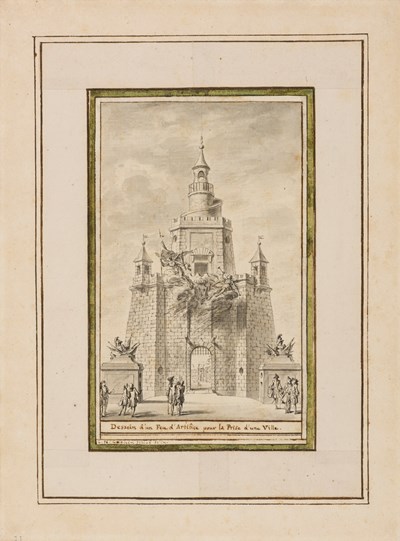 Design for a Fireworks Display


This is a preparatory study by Cochin for an engraved illustration, in reverse, that appeared in a new and revised edition of the French military engineer and explorer Amedée François Frézier’s book 'Traité des feux d’artifice pour le spectacle', published by Jombert in 1747. First published in 1707, Frézier’s book was a comprehensive treatise on fireworks, rockets and pyrotechnics for ceremonial, recreational and military use, and also described the science, background and manufacture of decorative fireworks.

The printed caption of Cochin’s illustration in Frézier’s book provides a description of the structure here depicted: ‘The Theatre of Fireworks (Théatre d’Artifice) illustrated on this plate relates to some military expedition, such as a successful battle, the capture of a city, etc. The body of the edifice is a fortress, whose main entrance is announced by two entry boxes on both sides of the door, to house sentries, and at the same time to serve as a base for the military trophies placed above. On the top of the walls one can see on one side the figure of Victory, who plants the flag of the victor, and on the other side, the figure of Fame sets forth to announce the news to the whole world. This structure is completed by a keep or a very tall belfry, the top of which is reached by a spiral ramp that runs along the outside of this keep. This decoration is in the style of the Théatre d’Artifice that was erected in Paris in front of the Hôtel de Ville in celebration of the taking of the city of Ypres by His Majesty on 27 June 1744.’

This drawing may have once belonged to Cochin’s friend, patron and publisher Charles-Antoine Jombert (1712-1784), who commissioned his first book illustrations from Cochin in 1737 and continued his close professional relationship with the artist until his death. In all, Jombert owned 284 of Cochin’s drawings, almost all of which were studies for book illustrations, and these were dispersed at auction in Paris in 1776.

Design for a Fireworks Display