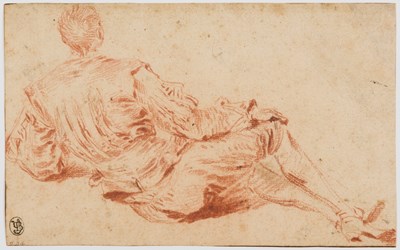 A Reclining Man, Seen from Behind

Red chalk.
Made up at the upper right corner.
Numbered 204 [partly cut off] at the lower left.
A French customs stamp on the reverse of the old mount.
A printed label of the Parisian framer and mounter Maurice Hauet on the old backing board.
107 x 173 mm. (4 1/4 x 6 3/4 in.)


This drawing can be identified as a study for the reclining male figure that appears at the centre right foreground of one of Pater’s finest works, the large painting The Dance of c.1725. The painting was one of a group of fête galantecanvases acquired by Frederick the Great, King of Prussia, for his palace of Sanssoucci at Potsdam, near Berlin, where it remains today as part of the Stiftung Preussische Schlösser und Gärten. (In assembling one of the finest collections of 18th century art in Europe, Frederick the Great – a friend and patron of Voltaire - came to own more than forty paintings by Pater, alongside numerous superb works by Watteau and Nicolas Lancret.) A smaller variant of The Dance by Pater, which includes the same figure near the right edge of the composition, is in the collection of the Worcester Art Museum.

The number 204 at the bottom left of the present sheet indicates that it was once part of an album of over five hundred drawings – the majority by Pater, but also including drawings by Watteau and Claude III Audran – assembled in the second half of the 18th century, and known as the ‘Groult Album’ after it entered the collection of the industrialist Camille Groult (1837-1908), whose impressive collection of paintings, drawings and tapestries was kept in his hôtel particulieron the avenue Malakoff in Paris. His collection then passed to his son, Jean Groult (1868-1951).

Part of the contents of the Groult Album, amounting to around a hundred sheets, were acquired by the Louvre in 1998. This drawing, however, appears to have been removed from the album much earlier, since it is recorded in the exceptional collection of 18th and 19th century French prints and drawings belonging to the Parisian antiquaire Alfred II Beurdeley (1847-1919). While the bulk of the Beurdeley collection was dispersed, after his death, at auction in 1920 and 1921, the present sheet was part of a group of over three hundred 18th century French drawings – including several examples each by François Boucher, Jean-Honoré Fragonard, Nicolas Lancret, Jean-Baptiste Oudry, Hubert Robert, Augustin and Gabriel de Saint-Aubin, Louis-Roland Trinquesse and Antoine Watteau – which were sold from the Beurdeley collection at auction in Paris in 1905.

At the time of the 1905 Beurdeley sale, the present sheet was thought to be by Watteau, and was sold together with a related red chalk drawing of a reclining man, also at the time attributed to Watteau but in fact by Pater. This second drawing from the Beurdeley collection is a study for a figure in Pater’s painting Le Joeur de Lute of c.1720-1725 at Sanssoucci, and is stylistically akin to the present sheet. A similar red chalk drawing by Pater of a reclining man seen from behind, which appeared at auction in London in 1971, has been tentatively related to the Worcester painting.

Among other stylistically comparable drawings by Pater is a red chalk study of two seated men, also at one time part of the Groult Album, in the Musée des Beaux-Arts in Rouen.

A Reclining Man, Seen from Behind