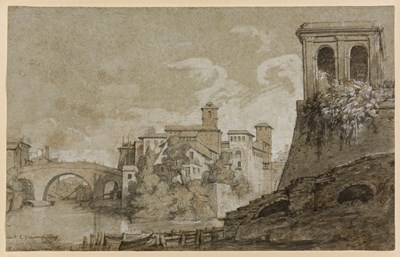 A View of the Tiber Island and the Pons Cestius, with the Church of San Bartolomeo all’Isola, Rome Sold


Indistinctly signed by the artist and dated 1729 (although the date can also be read as 1725 or 1727), the present sheet is among the earliest views of Rome by a pensionnaireat the Académie de France. The drawing depicts the small boat-shaped island in middle of the Tiber river, dominated by the 17th century church of San Bartolomeo all’Isola, seen from downstream. In the centre is the 12th century bell tower of the church and, just to the right, the fortified Torre Caetani, dating from the 10th century. At the left of the composition is the Pons Cestius, the ancient stone bridge linking the Tiber Island to Trastevere in the western part of the city; the bridge was reconstructed and widened in the late 19th century. The large tower in the foreground at the upper right of the composition, which no longer exists today, sat above an old water mill on the right bank of the Tiber.

Delobel also made a drawing of the opposite view, looking downstream from the southern end of the Tiber Island towards the Temple of Hercules Victor and the campanile of the church of Santa Maria in Cosmedin. Dated 1728 and inscribed ‘Vüe dedans le cloîstre de St. Barthelemy’, the drawing is today in the collection of the Rijksmuseum in Amsterdam. A stylistically similar drawing on blue paper depicting houses on the banks of the Tiber opposite the church of San Bartolomeo all’Isola, which appeared at auction in 2010 with an attribution to Etienne Jeaurat, may also in fact be by Delobel. (The present sheet was, until recently, similarly incorrectly attributed to Jeaurat.)

Other Italianate landscape drawings by Delobel include a View of the Domus Augustiana on the Palatine, Rome, dated 1724, formerly in the collection of Pierre-Jean Mariette and today in the Louvre, an undated View of the Ruins of the Ancient Baths in Rome in the Horvitz Collection in Boston, and a View of Houses and Temples on a Hill in Rome, formerly in the collections of John Barnard and Denys Sutton and sold at auction in New York in 2005. A drawing in watercolour and gouache of The Falls at Tivoli, formerly in the Paul Oppé collection, was recently sold at auction in London and is now in the Metropolitan Museum of Art in New York.

Although only a handful of landscape drawings by Nicolas Delobel, some of which are dated between 1725 and 1728, are known today, he must have produced a significant number of such works. This is further evidenced in the fact that a group of around thirty-four drawings by Delobel of views in Rome, Tivoli and Caprarola were in the collection of the 18th century sculptor Philippe Cayeux and were dispersed at auction in Paris in 1769.

The present sheet was once part of the remarkable collection of over 3,600 French drawings, dating from the 16th to the 19th centuries, assembled by the art historian Charles-Philippe, Marquis de Chennevières-Pointel (1820-1899), who served as a curator at the Louvre between 1846 and 1870, and later as director of the Ecole des Beaux-Arts in Paris.

A View of the Tiber Island and the Pons Cestius, with the Church of San Bartolomeo all’Isola, Rome