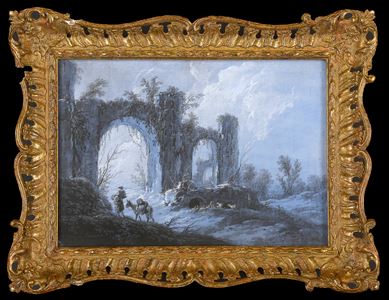 Landscape with Figures by the Ruins of a Roman Aqueduct Sold


This landscape belongs to a small group of pastoral subjects by Pillement executed in shades of blue pastel applied directly onto prepared canvases; a somewhat unusual technique that the artist occasionally adopted. Pastel landscapes in this distinctive blue tonality are quite rare in Pillement's oeuvre, but their origins can be traced to an important decorative project undertaken by the artist during his stay in Vienna between 1763 and 1765. Pillement received a commission from the Empress Maria Theresa for a series of eighteen large landscapes and seascapes - all drawn in blue monochrome pastel on prepared canvases - for a room (known as the Blaue Pastellzimmer, or Blue Pastel Room) in her summer residence, the Blauerhof (or Blue Palace) at Laxenburg, outside Vienna. Eleven of these remarkable, large blue pastel scenes survive today, in the collection of the Historisches Museum der Stadt Wien in Vienna. The present pair of pastel landscapes are very similar in technique, subject, mood and effect to the series of Laxenburg pastels, and must have been inspired by them. A similar pair of blue pastel landscapes on canvas, both dated 1767, was sold at auction in France in 2011, and the present pair may perhaps also be dated to this relatively early part of Pillement's career, within a few years of his work for Maria Theresa in Vienna. However, the artist appears to have occasionally produced such works later in his career as well; another pair of comparable blue monochrome pastel landscapes, one of which is dated 1790, are in an American private collection, and currently on loan to the J. Paul Getty Museum in Los Angeles. Pillement also produced a handful of pastel landscapes similar in colouring and effect, but drawn on blue paper rather than on a prepared canvas, such as a large drawing of peasants near a farm, signed and dated 1795, in the Musée des Beaux-Arts in Béziers.

Landscape with Figures by the Ruins of a Roman Aqueduct