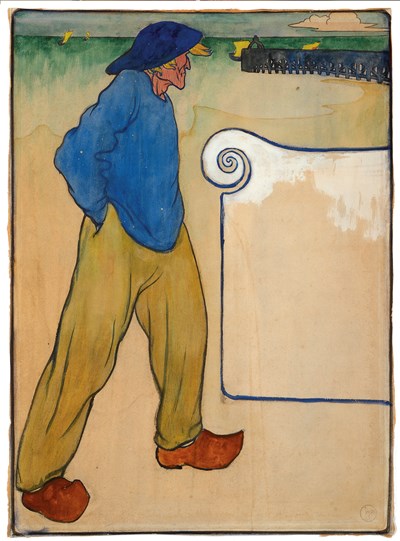 A Fisherman on a Beach

Watercolour and gouache, with framing lines in brown ink. Stamped with the artist's monogram he in a circle (not in Lugt) at the lower right. The artist's monogram also applied to a label stamped PROVENANT DE LA COLLECTION and inscribed Charles De Mey, and further inscribed Pecheur sur la plage / de Henri Evenepoel and Je certifie cette / oeuvre authentique / C. De Mey. on the old backing board.570 x 411 mm. (22 3/8 x 16 1/4 in.)


Given its size, this large drawing would seem to have been intended as a design for a poster or advertisement, rather than a book illustration. As the artist's biographer Francis Hyslop has written, 'A born draftsman with an eye to a self-supporting career, Evenepoel took an intense interest in the graphic arts.' He greatly admired and collected posters, prints and magazine or newspaper illustrations by artists such as Henri de Toulouse-Lautrec (whose studio he visited, and who he described as 'an artist of immense value…a complete artist'), as well as Jules Chéret, Jean-Louis Forain, Théophile-Alexandre Steinlen and Adolphe Willette. As a means of earning some income in the first years of his brief independent career, Evenepoel designed around a dozen posters. One such poster, advertising the ferry line linking Ostend and Tilbury in Essex, was published in 1893, and includes the same sort of blank cartouche with a curlicued corner seen in the present sheet. A similarly dressed fisherman appears in another gouache design for a poster by Evenepoel of c.1894, promoting the beach resort of Nieuport-Bains in Flanders. Indeed, the present sheet, which also shows what appears to be the wooden pier at Nieuport-Bains in the background, may have been an unused design for the same poster.The drawing probably first belonged to Evenepoel's cousin Louise van Mattemburgh (1869-1941), with whom the artist first lived when he arrived in Paris to study at the Ecole des Beaux-Arts. He soon fell deeply in love with Louise who, in November 1894, gave birth to a son by him, named Charles. Evenepoel had planned to marry Louise before his sudden death from typhoid in 1899.

A Fisherman on a Beach