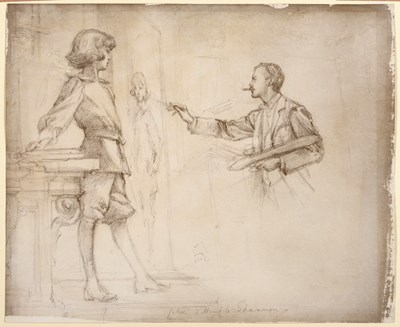 Pencil, with touches of pen and brown ink, on paper washed a pale grey. Inscribed John sitting to Shannon at the lower centre. Further inscribed in pencil on the verso.239 x 292 mm. (9 3/8 x 11 1/2 in.)ACQUIRED BY THE NATIONAL GALLERY OF ART, WASHINGTON, DC.


This drawing depicts the artist's young son John Manners being painted by the Anglo-American artist James Jebusa Shannon (1862-1923), one of the leading society portrait painters in London, at his studio in Holland Park in 1897. The second son of the Marquess and Marchioness of Granby, John Henry Montagu Manners, Lord Roos (1886-1940) was ten or eleven years old at the time this drawing was made. His elder brother Robert, Lord Haddon, had died three years earlier, at the age of nine, and John was the heir to the dukedom. Educated at Eton and Trinity College, Cambridge, John Manners joined the Diplomatic Service and was posted to the British Embassy in Rome in 1909. The following year he was commissioned into the 4th Battalion Leicestershire Regiment as a 2nd Lieutenant. Although he was sent to the Western Front in 1915, Manners was kept away from the front lines by his superiors - much against his wishes and to his great shame later in life - largely due to the efforts and influence of his mother, the Duchess of Rutland, who was determined to keep her only surviving son well away from the fighting. John Manners married Kathleen Tennant in 1916, and became the 9th Duke of Rutland on the death of his father in 1925. He died of pneumonia at Belvoir Castle, the Leicestershire seat of the Dukes of Rutland, in April 1940.Violet Manners was to be among Shannon's most loyal patrons. Beginning in 1888 and extending over a period of some three decades, the artist painted several portraits of her, as well as of her husband and children. Derived from the example of Sir Anthony Van Dyck, Shannon's finished painting of John Manners, standing and accompanied by a dog, was exhibited at the New Gallery in 1897, and remains at Belvoir Castle today. A later portrait of John Manners by Shannon, painted in 1908, is also at Belvoir Castle.In her manuscript inventory, The record of about 607 Pencil Portraits, Some tinted by Violet Duchess of Rutland, presented by her to the library of the Victoria and Albert Museum two months before her death, she noted that she had drawings of 'My Son John 9th Earl of Rutland. / many many as a child / & later - also a life size Marble head 8 years old / 1894 / big head of him as aged 21 from Memory / drawn with a soft pencil life size Jan. 1937.' A portrait drawing of John Manners by his mother Violet, also executed in 1897, was reproduced as a lithograph, of which an impression is in the collection of the National Portrait Gallery in London.