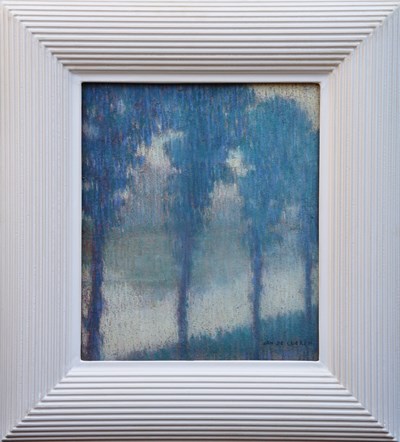 Trees by a River Sold


Jan de Clerck worked mainly in oil, pastel or watercolour. In the early part of his career he often painted pastels on a support of felt, as in the present work. As Richard Kerremans has noted, 'Taking advantage of the absorbent quality of this innovative backing, he was able to create a hazy effect appropriate in giving his landscapes and marine-scenes a melancholique atmosphere, or a poetic climate to his religious evocations. He was also able to play upon the irregularities of the material, either stressing them through a scraping technique or by transparently allowing the brownish-violet colour to appear. While most of the works painted on this backing are small, there is at least one which is striking because of its format. It is his last work and the one which he was working on shortly before his death. The fact that he used pastel applied to "matting felt" for this image of a fisherman, the genuine synthesis of his artistic and human preoccupations, indicates what importance this technique had in his opinion.'Drawn on felt, the present pastel is an early work datable to c.1905-1906. De Clerck's paintings were often admired for their atmospheric properties; as the contemporary art critic Maurice de Praetere wrote, 'M. De Clerck applies a particular technique: the stillness in his paintings is potential motion, it is dynamic repose. He lets peace and quiet sink down in threads, like the upright, slow drops of a quiet summer rain. It is as if an atmospheric screen were slowly sinking on a stage from which the last actor has silently slipped away.' Stylistically comparable pastel landscapes painted on felt include Sous-bois and Street in Ostend of 1904 and Soirée poetique (Poetical Evening) of 1906, all of which are in private collections. The present pastel once belonged to the Belgian musician and composer Ernest de Taeye (1864-1913).

Trees by a River