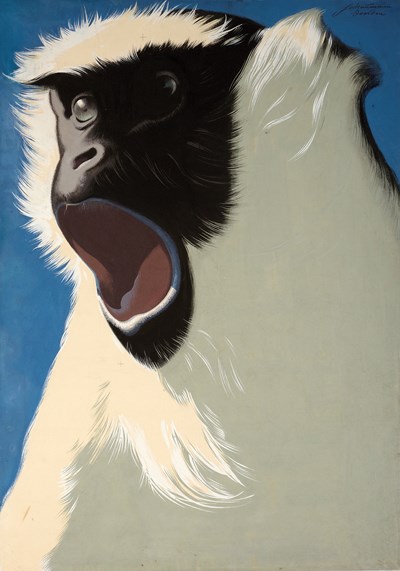 A Mantled Guereza: Design for a Poster for the Dresden Zoo Sold


Datable to 1953, this large gouache drawing is a design for a poster advertising the Dresden Zoo, founded in 1861 and the fourth oldest zoo in Germany. Horst Naumann produced a number of striking designs for posters for the Dresden Zoo in the 1950s, 1960s and early 1970s, featuring penguins, seals, polar bears, white-tailed guerezas, orangutans, chimpanzees, mandrills, giraffes and rhinoceroses, among others. Naumann also designed posters for the zoos of Berlin and Leipzig. The mantled guereza (Colobus guereza), also known as the eastern black-and-white colobus or the Abyssinian black-and-white colobus, is a monkey found throughout central and eastern Africa. Although undated, the present sheet is likely to date from shortly after 1960, when guerezas were first introduced to the Dresden Zoo, where they have since been successfully bred. Naumann also illustrated guerezas for a East German postage stamp commemorating the hundredth anniversary of the Dresden Zoo in 1961.

A Mantled Guereza: Design for a Poster for the Dresden Zoo