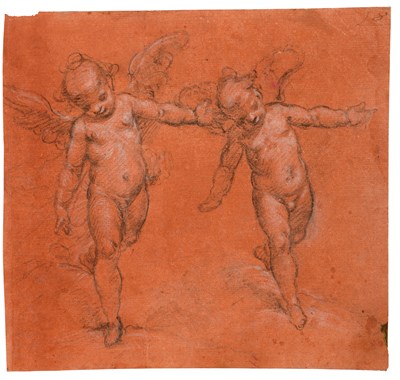 Two Studies of a Winged Putto


The pose of the winged putti in this drawing is similar to that of an angel in Alessandro Casolani's monumental altarpiece of The Adoration of the Shepherds, signed and dated 1596, in the Duomo in Siena, as well as in another, equally large Adoration of the Shepherds in the Collegiata dei Santi Simone e Giuda in the town of Radicondoli, datable to c.1590. Similar angels also appear in The Decapitation of Saint John the Baptist, painted in the first years of the 17th century and today in the church of Santi Niccolò e Lucia in Casteldelpiano and a Martyrdom of Saint Bartholomew, painted in 1604 for the Chiesa del Carmine in Siena.Among a handful of stylistically similar drawings by Alessandro Casolani on red washed paper is a study of the heads of two women and a baby, which was with Colnaghi in 1990.

Provenance:
The Earls of Crawford and Balcarres, Balcarres House, Colinsburgh, FifeBy descent to a private collection.

Two Studies of a Winged Putto