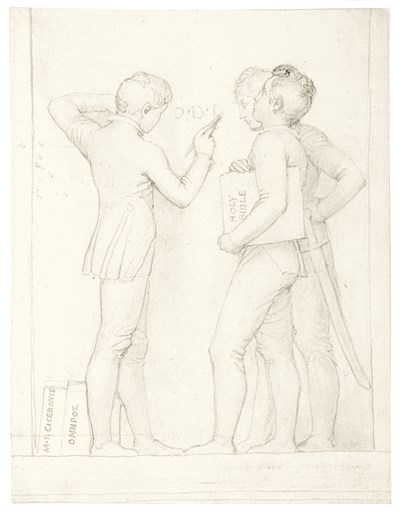 A Scholar, a Cleric and a Soldier: Three Youths Inscribing a Monument Sold


The epitome of the Neoclassical idiom in English art, John Flaxman’s drawings are characterized by a purity of line, and, as David Bindman notes, are ‘governed primarily by outline and contour, to which tone and colour are usually subordinated.’ His draughtsmanship, as manifested in the numerous published engravings after his drawings used to illustrate the works of Homer and others, was highly influential on such artists as Jacques-Louis David and Jean-Auguste-Dominique Ingres in France and the Nazarene painters in Germany.Many of Flaxman’s drawings were studies for funerary monuments, and the present sheet may well have been intended as a design for a sculpted monument. As one scholar has noted, ‘Flaxman loved to draw children of all ages, either grouped or singly, and in some of his sketches he captured them in the most playful of moods...’ Among stylistically comparable finished drawings of children, executed with a lightly shaded wash, is a study of Four Girls Reading in the Huntington Library, Art Collections and Botanical Gardens in San Marino and a Study for a Monument to the Reverend John Clowes, drawn in 1818, in the Yale Center for British Art in New Haven, while a similar standing boy appears at the left edge of Flaxman’s Design for a Gothic Monument to Matthew Quantock, drawn around c.1813-1814, in the British Museum. Similar groups of youths are also seen in several examples of Flaxman’s sculpted work, such as the tomb of Dr. Joseph Warton in Winchester Cathedral, executed between 1800 and 1804, the monument to Harriet Susan, Viscountess Fitzharris in Christchurch Priory in Hampshire, executed between of 1816 and 1817, and the monument to Lord Nelson in St. Paul’s Cathedral, completed in 1818.The first known owner of this drawing was the sculptor and poet Thomas Woolner, R.A. (1825-1892), a founder member of the Pre-Raphaelite Brotherhood. He is likely to have purchased the drawing at the auction of part of the contents of Flaxman’s studio at Christie’s on 26 April 1876, to judge from a letter written by Woolner to his friend, the critic and poet Francis Turner Palgrave, on the same day: ‘Dear Palgrave, You will see by the enclosed that I have got you many lots [of Flaxman drawings] all good, and most of them cheap…They are so lovely that they must wait awhile before I can tear my heart to part from them. I got a few bargains. To my mind the most valuable of all the lots was 94 - Portrait of Flaxman by himself: an inimitable chalk drawing highly finished, and certainly the best portrait of him in the world. I gave…guineas, but would not take 10 times that sum for it. It is life size.’Ray Livingston Murphy (1923-1953) was a precocious child, and began collecting books while still a teenager. He served as a foreign correspondent during the Second World War, and it was in London, where he lived for two years after the war while writing a biography of Lord Louis Mountbatten (published in 1948 as The Last Viceroy) that he met the scholar and collector Paul Oppé, who became his mentor. Murphy collected 18th and 19th century paintings and English watercolours, and later Old Master Drawings. His sudden death in 1953, at the age of just twenty-nine, left his mother devastated with grief. She moved into his house in New York and lived there until her own death, when the collection was eventually dispersed at auction.

A Scholar, a Cleric and a Soldier: Three Youths Inscribing a Monument