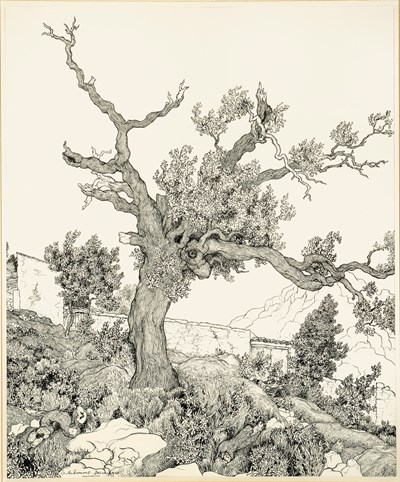 An Olive Tree near Saint-Paul-de-Vence Sold


Ribemont-Dessaignes began to draw landscapes in 1944, when he settled in the South of France. In 1955 he produced a series of large pen drawings of rocks and trees around the nearby hilltop village of Vence. At the end of the same year an exhibition of thirty drawings of trees by the artist was held at the Galerie Mirador in Paris. This large drawing can be closely related to a series of ten engravings of trees produced by Ribemont-Dessaignes to illustrate a book of poetry entitled Arbres: poèmes by his close friend Jacques Prévert. Published in 1967 and reprinted in 1976, Arbres was a true collaboration between the artist and the poet, with the engravings of trees closely integrated with the poems. The present sheet is remarkably similar in composition and technique to each of the illustrations for Arbres, albeit significantly larger in scale. Prévert had earlier written an introduction to the catalogue of a 1951 exhibition of drawings by Ribemont-Dessaignes in Vence, entitled ‘Itinéraire de Ribemont’, which was reprinted in Prévert’s La Pluie et le beau temps in 1955.

An Olive Tree near Saint-Paul-de-Vence