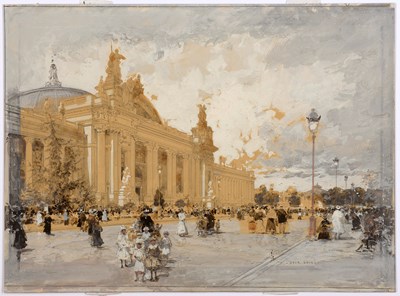 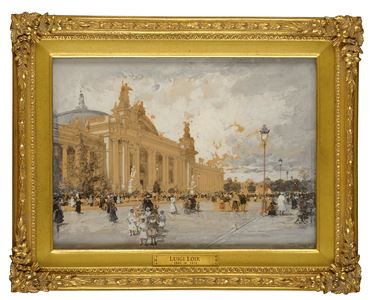 
It was as a painter of the modern urban Paris of the latter half of the 19th century that Luigi Loir was best known. As one contemporary writer noted of Loir, ‘One can say of this master that he created a genre: ‘parisianism’...he is, in effect, the painter of Paris par excellence; no different aspects of the city, often momentary and fleeting, and none of its successive transformations, is any secret to him.’ And, as the 19th century French poet and writer Théodore de Banville aptly noted, ‘[Jean] Beraud painted the Parisians of Paris and Luigi Loir the Paris of Parisians.’ Built for the Exposition Universelle of 1900, the Grand Palais des Champs-Elysées in Paris was a large exhibition hall in the Beaux-Arts style; the work of four different architects. Construction began in 1897 and the building was inaugurated in May 1900. Dominated by a 240 metre long central exhibition space or nave under a barrel-vaulted glass roof, the Grand Palais was used mainly for art exhibitions and Salons.As the Loir scholar Noé Willer has written of the present drawing, ‘The Grand Palais with its magical lights stands in the foreground but the crowd with its different costumes and the tenderness of the children dominate the picture.’ Another watercolour view by Loir of the Grand Palais, seen from the opposite end of the building and much freer in handling than the present sheet, depicts the scene at night.