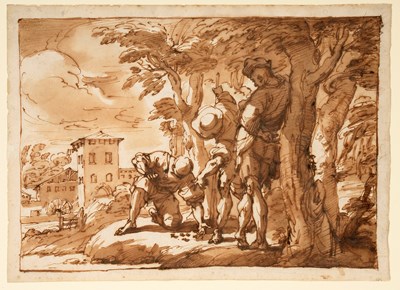 Pen and brown ink and brown wash, over an underdrawing in black chalk, with framing lines in brown ink. Inscribed with various numbers and dimensions on the verso, in the margins of the sheet.211 x 290 mm. (8 1/4 x 11 3/8 in.) [sheet]


This engaging genre scene is likely to have been intended as an autonomous, finished drawing in its own right, as is also suggested by the framing lines surrounding the composition and the large margins of the sheet. Stylistically and thematically comparable drawings by Ubaldo Gandolfi include a study of A Group of Nude Men Listening to One Playing the Lute, in the Rijksuniversiteit in Leiden, and a pair of Pastoral Scenes in a private collection in Milan. Also comparable in handling and technique is a drawing of Mercury Playing his Flute to the Sleeping Argus, with Colnaghi in 1988, which is a study for a painting of 1770.As Mimi Cazort and Catherine Johnston have noted of the artist’s drawings of the 1770s, ‘As Ubaldo’s style developed, it became increasingly fluid, and the lines tended to lose the crispness of the earlier drawings and attain something of the calligraphic quality [of] Gaetano’s pen style’, adding that, ‘the brilliant illumination of the forms and the confidence with which the wash is splashed on are features that suggest a profound knowledge of the contemporary Venetian drawing tradition.’ Indeed, a drawing such as the present sheet anticipates the better-known finished genre drawings of Venetian life produced by Domenico Tiepolo in the 1790s.