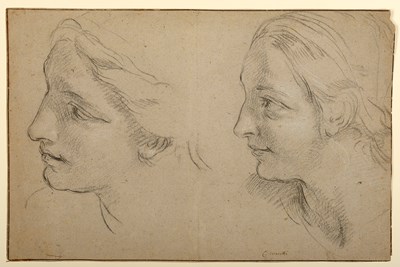 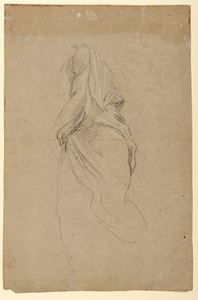 Two Studies of the Head of a Woman [recto], Study of Drapery of a Standing Woman [verso] Sold


Although the two heads in this drawing have thus far not been related to any painting by Carlo Maratta, a resemblance may be noted between the left hand head and that of a kneeling woman at the right edge of the artist’s Adoration of the Shepherds in the Hermitage in St. Petersburg. A comparable drawing of the head of a woman by Maratta is in the Witt Collection at the Courtauld Gallery in London. The attribution of this drawing has kindly been confirmed by Dario Beccarini.The Scottish banker Sir William Forbes, 7th Baronet of Pitsligo (1773-1828) began, as a young man, to assemble a fine collection of Old Master prints and drawings, to which was added, somewhat later in his life - following a trip to Italy in 1827 - a small but choice collection of Old Master paintings. Part of his collection may have been inherited from his father, Sir William Forbes, 6th Baronet of Pitsligo (1739-1806), who undertook a Grand Tour of Italy in 1791 and 1792, during which he purchased a number of drawings and prints.

Two Studies of the Head of a Woman [recto], Study of Drapery of a Standing Woman [verso]