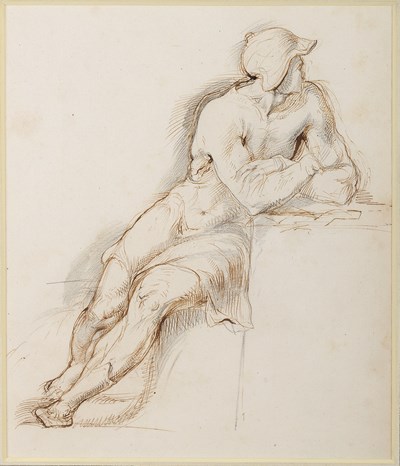 Study of a Seated Man Wearing a Helmet Sold


Most early drawings by Richmond have long remained in the possession of his descendants. This drawing, which depicts a man dressed as a soldier all’antica, may be likened to a pen and ink study of a seated man, sold at auction in 1977, that was once part of a sketchbook used by Richmond between 1824 and 1830. The present sheet may be dated to the same period, during which the artist studied under Henry Fuseli at the Royal Academy Schools, met the elderly William Blake, Samuel Palmer and Edward Calvert, joined ‘The Ancients’, and completed his training in Paris.

Study of a Seated Man Wearing a Helmet