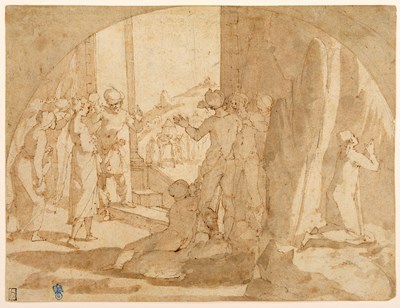 
A closely related drawing by Andrea Boscoli of Judith Before Holofernes, of similar dimensions and technique and also in the form of a lunette, is in the collection of the Albertina in Vienna. Both the Albertina drawing and the present sheet may be dated to the 1590s, and are unrelated to any surviving painting or fresco by the artist. Boscoli treated the theme of Judith and Holofernes only rarely. A vault fresco of Judith with the Head of Holofernes was painted in 1605 for the church of Santa Maria delle Vergine in Macerata, while the artist’s biographer Filippo Baldinucci notes that a series of six canvases of scenes from the stories of Judith and Holofernes and Esther and Ahaseurus were painted in 1599 for the Florentine politician, humanist and soldier Baccio Valori the Younger; these paintings, which are now lost, are described as being vertical in orientation.

A slightly larger variant of the present sheet is in the collection of the Princeton University Art Museum in New Jersey.

Amédée-Paul-Émile Gasc (1817-1866) seems to have begun collecting drawings in the 1830s. (His younger brother Charles Gasc was also a collector of drawings, and the two brothers sometimes sold or gifted drawings to each other.) In 1858 Paul-Émile sold some drawings to the Musée des Beaux-Arts in Orléans, followed two years later by a further donation of drawings to the Musée des Beaux-Arts in Dijon. In 1861, however, Paul-Émile Gasc decided to sell his entire collection of around 1,360 drawings in two auctions, held in Paris in January and April of that year. This drawing later belonged to the eminent English biologist William Bateson (1861-1926), and was later acquired by the German architect and decorator Bernhard Himmelheber (1898-1966), whose collection comprised mainly German and Italian drawings from the 16th to the 19th centuries.