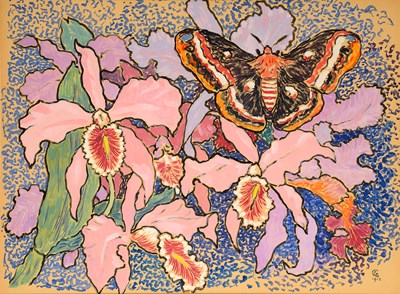 Orchids and an Emperor Moth Sold


This large watercolour was executed in 1912 and is signed with the artist’s late monogram. During this period Gisbert Combaz was consistently producing works with a pronounced Oriental influence, reminiscent in style of his work from before the turn of the century. The painterly style of these large-scale floral watercolours stylistically mirrors such posters of the same period as one for the exhibition in Charleroi Les art anciens du Hainaut, Salon d’art moderne, published in 1911.This watercolour was once part of the remarkable collection of late 19th and early 20th century Belgian graphic art assembled by Louis and Berthe Wittamer-De Camps, the owners of the town house known as the Hôtel Solvay on the Avenue Louise in Brussels. A masterpiece of Belgian Art Nouveau architecture and interior decoration, the Hôtel Solvay was the work of the architect and designer Victor Horta, and was built between 1895 and 1900. The house was acquired by the Wittamer family in the 1950s and remains a private home today, with its unique furnishings intact. Berthe Wittamer was a pupil of Combaz, and she and her husband became keen collectors of his work.

Orchids and an Emperor Moth