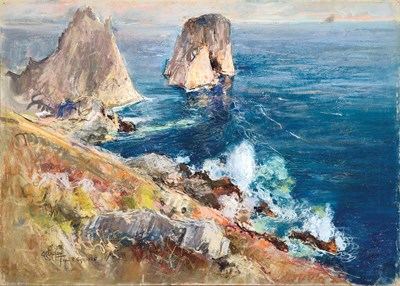 The Faraglioni at Capri


Dated August 1925, this large and vibrant pastel depicts the famous Faraglioni, a series of three towering rock formations or sea stacks, just off the coast of Capri in the Bay of Naples. Eroded by the waves, the three rock stacks rise to an average height of a hundred metres above sea level, and are known as Stella (which remains connected to the island of Capri), the Faraglione di Mezzo, with a natural stone archway, and the Faraglione di Fuori (or Scopolo). Casciaro often worked on Capri, and painted several pastel views of the Faraglioni over the course of his career.

The Faraglioni at Capri