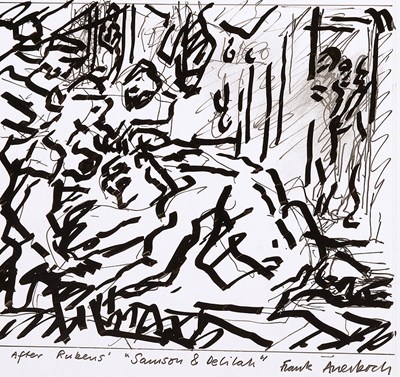 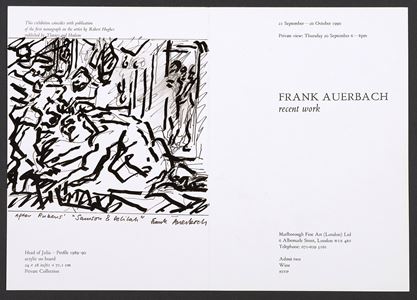 
Frank Auerbach made drawings after Old Master paintings in the collection of the National Gallery in London throughout much of his career, beginning in the late 1940s. As Robert Hughes has written, ‘Auerbach’s attachment to the National Gallery in London is deep and almost fanatical; throughout the 1950s, 60s and 70s he and his friend [Leon] Kossoff kept up what struck other artists and students as the quaint habit of going to Trafalgar Square at least once a week to make drawings from certain paintings there.’ Referring to his frequent trips to the National Gallery, Auerbach has said that ‘it reminds me of what is required. All the great painters: there’s a unity like a great wind blowing everything together, you get a glimpse of that.’ In another interview, he noted, ‘My most complimentary and my most typical reaction to a good painting is to want to rush home and do some more work. When the bus services were better I used to go to the National Gallery more frequently, just go and come back. And I find that towards the end of a painting I actually go and draw from pictures more to remind myself of what quality is and what’s actually demanded of paintings. Without these touchstones we’d be floundering.’ And, in another conversation, he added, ‘I have hardly ever drawn from a modern picture – I know how it’s made. When it is one by an old master, I know they are marvellous, but I can’t see what is the secret that makes them so.’ In 1992 and 1993 Auerbach made a large number of drawings after Rubens’s large panel of Samson and Delilah in the National Gallery, which was painted around 1609-1610. As he noted of the painting, ‘if one looks at the hands there is something terribly poignant about the peasant hands of Samson and of Delilah and the sophisticated, tricky, sly Iago hands of the old woman and the barber...the yellow, the red and the purple drapery, that great knot of people like a tear which underscores the fleshy drama which is an orchestrated accompaniment of poignancy and waste. It’s sort of obvious that she’s betrayed him, that he’s ruined and that she loves him.’ Auerbach’s studies after Rubens’s Samson and Delilah eventually resulted in a large painting, completed in 1993, that was recently sold at auction in London. As Colin Wiggins notes, ‘Auerbach’s painting took several months to make, yet what the viewer sees is only the last session of work. The picture was completed after many previous and failed attempts, all of which were scraped off before the next try...The finished work is the result of both the accumulated experience of the failed attempts and of the many small working drawings executed in front of the original. These were made regularly and frequently during the months that Auerbach was working on the painting, taken back to the studio and pinned on the wall. It was to these, rather than to a reproduction of the painting, that Auerbach referred when working on his version.’

Study after Rubens’ Samson and Delilah