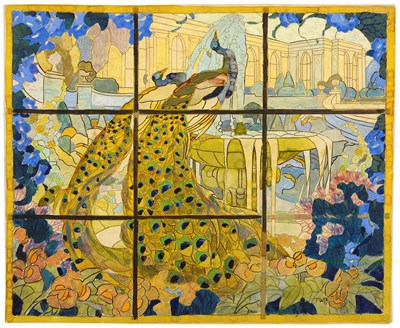 Design for a Stained Glass Decoration, with a Pair of Peacocks in a Garden Sold


This is a design for a stained glass decoration. In the first quarter of the 20th century, Franz Waldraff collaborated with the leading glass painter Félix Gaudin (1851-1930), who also often worked with Eugéne Grasset. At the Salon de la Société Nationale des Beaux-Arts in Paris in 1906, Gaudin exhibited a stained glass panel decoration, designed by Waldraff, entitled Les paons (The Peacocks), for which the present sheet is a preparatory study. The glass panel has been lost or destroyed, but is recorded in an old photograph, as is a maquette for the same work by Waldraff2. The decoration, made up of nine panels, is believed to have been intended for the residence of a Sr. Cousino of Santiago, Chile. Cousino is known to have admired Waldraff’s work, since he is documented as having commissioned seven cartoons for other windows from the artist.Two further designs by Waldraff for stained glass panels painted by Gaudin, one a View of Alsace of c.1912 and the other a Garden with Statues by a Fountain of c.1914, are illustrated in a recent monograph on the work of Félix Gaudin.

Design for a Stained Glass Decoration, with a Pair of Peacocks in a Garden