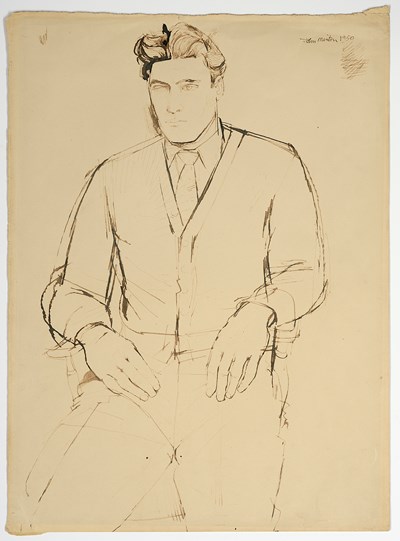 
A gifted portraitist, John Minton painted portraits throughout his career, but especially in the 1950s. In his painted and drawn portraits, he often chose to depict his subjects seated and seen from a high vantage point. As one recent scholar has noted, the artist ‘formed a personal lexicon which was largely concerned with the male figure, whether in landscape and urban settings, or in sensitive portraits of friends, students and lovers...Minton depicted many of his sitters in the same wooden Oxford Windsor Chair, with a high back and arm rests that enabled them to rest comfortably with their hands in their lap...These are not ‘heroic’ portraits concerned with conveying the outward masculinity of the sitters, but instead posses a quietness and intimacy which convey the sense of an inner reverie.’ Minton exhibited at the Royal Society of Portrait Painters in the two years before his death, in 1955 and 1956.John Minton’s portrait studies in pen and ink - ‘superb examples at their best of unforced draughtsmanship’, in the words of one friend and critic - are among the finest of his drawings. The present sheet is likely to depict one of a group of young art students who gathered around the inspiring figure of Minton and became known as ‘Johnny’s Circus’. The drawing may be a first idea for a more finished pen and ink portrait drawing of what appears to be the same sitter, which appeared at auction in 1997.

Provenance:
Piccadilly Gallery, London, in 1958 Acquired from them by Charles Ribon on 24 December 1958Private collection, Canada.

Portrait of a Seated Young Man