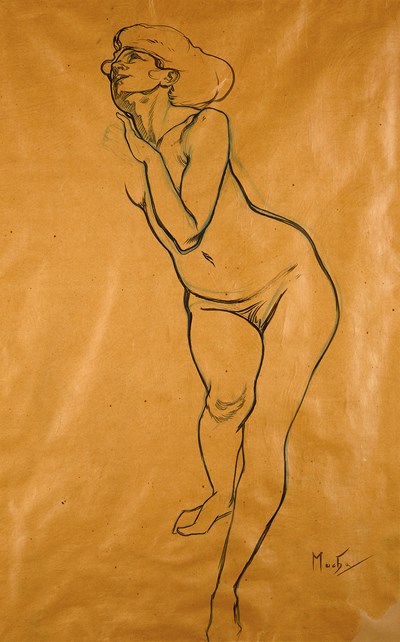 A Standing Female Nude (Study for Petronius and Eunice, from Quo Vadis) Sold


Measuring well over a metre in height, this monumental drawing is a preparatory cartoon for a large painting conceived by Mucha in 1902, the subject of which was taken from the historical novel Quo Vadis: A Narrative of the Time of Nero, published in 1895 by the Polish writer Henryk Sienkiewicz. Measuring around seven feet square, the painting – described by one modern scholar as ‘one of the best examples of Mucha’s “high” Art Nouveau painting style’ - was originally entitled Petronius and Eunice. The composition is dominated by the nude figure of the young Greek slave girl Eunice, who is in love with her master, Gaius Petronius, a member of the Emperor Nero’s court. She embraces a marble statue of Petronius, unaware that Petronius himself has entered the room. Captivated by her devotion, the Roman patrician falls in love with Eunice in return. In the painting, the face of Petronius would appears to be a self portrait of the artist.Long thought to be lost, the large painting of Petronius and Eunice, later known as Quo Vadis, has a fascinating history. The canvas was begun around 1904 and was completed by Mucha in Chicago two years later, in 1906, when it is recorded in an old photograph. When the artist returned to Europe, he left the painting with his friend, the architect Hercz. In 1910 the suggestion was made to use the painting as a tapestry design, but that never materialized. On Mucha’s return to America ten years later, he was said to have completely repainted the picture. While The Slav Epic was exhibited at the Art Institute of Chicago in 1920, Mucha consigned the large painting, now entitled Quo Vadis, along with several other works, to a selling exhibition at the long established Chicago picture frame makers Newcomb-Macklin Co. (That the artist must have regarded the painting as highly significant is seen in the fact he priced it at $10,000, roughly equivalent to $125,000 today.) The painting was unsold, however, and the work remained with Newcomb-Macklin for over fifty years and was soon forgotten. When the Newcomb-Macklin Co. went out of business in 1979, after over a century of dealing in frames, the old canvas, now in ruinous condition and unrecognized for what it was, was given away to a local carpenter. After being identified and passing through several hands, the painting was the subject of a court case which saw the work returned to Jiri Mucha, the artist’s son. The canvas is today in the collection of the city government of Sakai in Japan.Although the painting of Quo Vadis was long thought to be lost, the basic composition of was known from a smaller watercolour variant - dated July 29th 1904 and measuring 560 x 480 mm. – which is today in a private collection.

A Standing Female Nude (Study for Petronius and Eunice, from Quo Vadis)