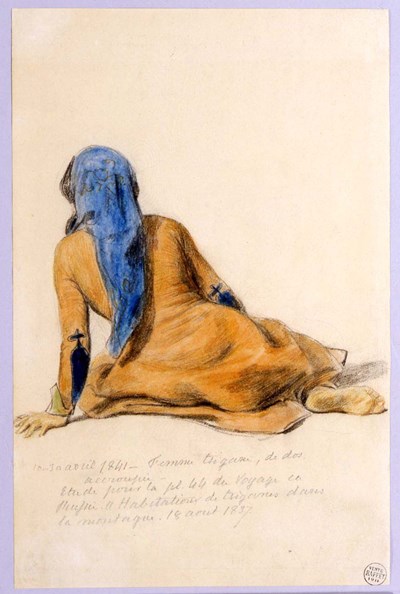 A Seated Gypsy Woman, Seen from Behind Sold


In 1837 Auguste Raffet travelled with Prince Anatole Demidoff on an expedition to southern Russia and the Crimea. The party left Paris on the 14th of June 1837, travelling overland through Hungary, Walachia, Moldavia and Bessarabia to Odessa and on to the Crimea. Prevented from returning overland by an outbreak of the plague in Odessa, the group set sail from Constantinople, arriving in Marseille on the 24th of November 1837. The illustrations Raffet made on the journey were used to illustrate Demidoff’s account of the expedition, the Voyage dans la Russie méridionale et la Crimée par la Hongrie, la Valachie et la Moldavie et retour par Constantinople, dedicated to Czar Nicolas I and published in six volumes between 1840 and 1848. (An English edition appeared in 1853.) The present sheet was drawn by Raffet on his travels with Demidoff in 1837, and is a study for the woman seated on a rug in the foreground of one of the plates illustrating the Voyage dans le Russie. As the artist has noted in an inscription at the bottom of the sheet, as well as on the lithograph for which it is a study, this drawing was made on the 18th of August 1837, when the Demidoff party visited a gypsy village in the mountains near the former Tatar capital city of Baghtcheh-Saraï (modern day Bakhchysaray in the Ukraine), northeast of Sebastopol in the Crimea. Demidoff described the village and its inhabitants in the Voyage dans la Russie; ‘Imagine the most extraordinary assembly of half-clad savages, living in caves instead of houses, - filthy dens, hollowed out by the hand of nature, or the grudging labour of sloth, in the sides of the large rocks which surround the valley. A numerous tribe of gipsies found these abodes ready-made, and accommodated themselves, with their natural indolence, to this troglodyte existence. Such is the chosen capital of this miserable race, and here do they delight to spread their squalor beneath the sun....and yet, even here, one is astonished to find occasionally a physiognomy, though certainly in a great minority, presenting the type of Asiatic beauty; fine young women, walking in their scanty rags with the dignity of stage queens...But these beautiful remains of a race now degraded are daily vanishing; and the traveller who passes through this valley bears away with him little more than a feeling of disgust at so much degradation.’ Earlier in the journey, Demidoff had written of such women: ‘The young Tsigan girls are remarkable for a peculiar kind of beauty, which still exhibits the characteristics of the race from which these wandering tribes are asserted by some authors to have descended; the supple and lithe figures, and delicate hands and feet of the women on the borders of the Ganges, reappear among them.’The present sheet bears the sale stamp of the artist’s son, Auguste Raffet, who served as curator of prints at the Bibliothèque Nationale in Paris. The younger Raffet donated a large group of his father’s works – numbering more than 3,800 drawings and prints - to the Bibliothèque Nationale in Paris between 1869 and 1891.

A Seated Gypsy Woman, Seen from Behind