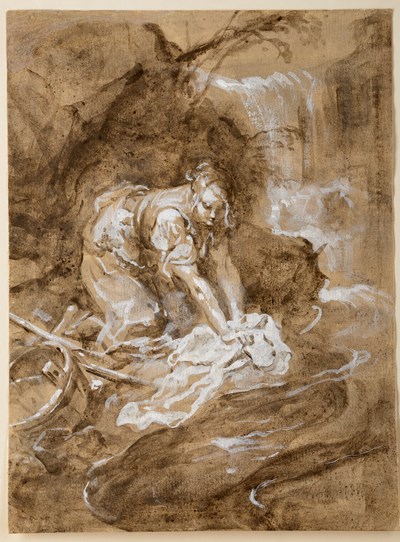 A Laundress at the Edge of a River Sold


Among the most overtly pictorial of Alessandro Magnasco’s drawings, the present sheet displays an especially bold use of white heightening to achieve brilliant highlights, particularly evident in the figure of the woman and the clothes she is washing, as well as the waterfall in the background. Among stylistically and technically comparable drawings are three related studies for altarpieces, all in American museum collections; a Flight into Egypt in the Cleveland Museum of Art, a Nativity in the Philadelphia Museum of Art and a Mystic Marriage of Saint Catherine in the Nelson-Atkins Museum of Art in Kansas City, Missouri. All three of these drawings for altarpieces, as well as a fourth depicting The Visitation formerly in a private collection in New York, are of similar shape and dimensions, and have been dated to c.1735. Like the present sheet, they display an extensive use of white heightening on brown paper, allowing the artist to achieve bold light effects.The same fluid passages of white heightening are also found in two related drawings by Magnasco of Christ Crowned with Thorns, in a private collection, and Christ Carrying the Cross, in the Nelson-Atkins Museum of Art. Other stylistically similar drawings by Magnasco include two studies of a Seated Man and a Seated Woman in the Biblioteca Ambrosiana in Milan and a large drawing of A Concert in a Tavern Among Ruins, in the same technique as the present sheet, which was sold at auction in London in 2014. Two studies of washerwomen by Magnasco, though not as freely drawn or expressive as the present sheet, are in the Uffizi, while a sheet of studies of five washerwomen is in the Ashmolean Museum in Oxford.Although the present sheet is not directly related to any known work by the artist, the pose of the figure is particularly close to the laundress in the centre of a collaborative painting by Magnasco and Antonio Francesco Peruzzini, formerly in the Italico Brass collection in Venice, in which Magnasco painted the figures, while Peruzzini was responsible for the landscape itself. Similar washerwomen appear in a number of other collaborative landscape paintings with figures by Magnasco; examples are in the collections of the City of York Art Gallery, the Muzeum Narodowe in Warsaw and the Allen Memorial Art Museum in Oberlin, Ohio.

A Laundress at the Edge of a River