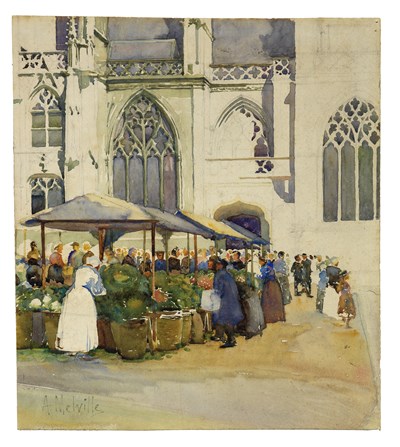 A Street Market by a Church, probably in Granville, Normandy


Datable to the late 1870s, this vibrant watercolour is a rare example of Arthur Melville’s early work, much of which is now lost. The present sheet may have been drawn in Granville, a coastal town in Normandy a few kilometres north of Mont Saint-Michel, which Melville visited in June 1878. The church depicted here is probably Notre-Dame du Cap Lihou in Granville, and this watercolour provides an apt example of a particular characteristic that the scholar Kenneth McConkey noted in Melville’s work: ‘he could...place the cutting edges of architecture with acuity, and his observation of crowds, the moving masses of humanity, was unmatched.’ Writing a few years before Melville visited the town, an English traveller described the area around the church of Notre-Dame du Cap Lihou in Granville: ‘The upper town, surrounded by its fortified walls, and crowned by its church and lighthouse, stands on a lofty promontory of rock, with the sea stretching out behind it...when we had climbed up the steep ladders leading to the walls of the upper town, we found endless pictures among the bright and varied scenes of the market...the view of the Bay of Granville is charming; and the church, on the verge of the lofty promontory, although gloomy-looking – being built of dark granite – has a solemn impressive interior: but the smells and dirt of the place are overpowering, even in the open air and in the fresh sea breezes.’Melville produced only a handful of watercolours in Granville, and the present sheet may be tentatively identified with one of two unlocated works by the artist; a Market Day at Granville, exhibited at Royal Scottish Academy in Edinburgh in 1879, or A French Market Place (Granville), included in the posthumous Melville exhibition at the Royal Institute of Painters in Water-Colours in London in 1906. Among other extant watercolours of Granville by Melville is a Street Market, Granville, dated 1878, in the Glasgow Museums collection. It was during his early years in France that, as the artist Romilly Fedden noted, ‘Melville’s work in water-colour began to reveal special qualities. He had discovered his medium. These were no tinted drawings dependent on a scaffolding of pencil work, but painting – painting so strong and virile that it could hold its own with any other medium – even with oil. The Frenchmen were astounded.’Fedden adds that ‘Melville may be called the great technician of water-colour...[His] job was water-colour, and he knew it so well, its ways, its difficulties, its capabilities, its limitations – he understood his medium and he mastered it. He was daring, unconventional. He tried things which no one else had tried, he followed no one, belonged to no accepted school, and in that, in his individuality, he stands apart.’

A Street Market by a Church, probably in Granville, Normandy