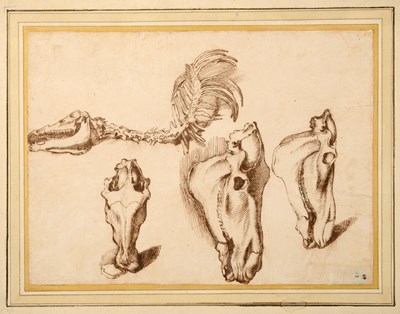 Studies of the Skull and Skeleton of a Horse


Long attributed to the Bolognese artist Bartolomeo Passarotti (1529-1592), and more recently given to the Genoese draughtsman Sinibaldo Scorza (1589-1631), this fine drawing was independently attributed to Filippo Napoletano by Hugo Chapman and the late Marco Chiarini. Napoletano produced a number of prints and drawings (the latter in both pen and ink and chalk) of animal skeletons, and was recognized by his contemporaries as an expert in anatomical studies of this type. As the writer and art dealer Giulio Mancini noted of Napoletano in 1621, ‘he earned a reputation and esteem for himself particularly in small things of fires, ships and animals, and was highly regarded for certain extravagant pictures of animal skeletons.’Between 1620 and 1621 Napoletano executed a series of etchings of animal skeletons entitled Incisioni di diversi scheletri di animali. The only extant complete set of these etchings, numbering twenty-one prints in all, is in an album in the Biblioteca Nazionale in Florence, although a set of modern impressions, taken from nineteen of the surviving plates, is in the Uffizi. The Incisioni di diversi scheletri di animali was the artist’s most celebrated series of prints executed during his Florentine period, and was dedicated to the German physician and scientist Johannes Faber (1574-1629), the papal doctor, anatomist and botanist whom Napoletano had met as a young artist in Rome. Faber had a strong interest in animal anatomy, and had assembled a study collection of around one hundred human and animal skeletons at his home near the Pantheon. It is thought that Faber commissioned Napoletano to produce a series of etchings of his skeletons, a project that was not begun before the artist left Rome in 1617 to settle in Florence. The work was eventually completed by August 1621, and was possibly delivered to Faber by the artist himself, who returned to Rome following the death of Cosimo II in February of that year. As Richard Wallace has noted of Napoletano’s etchings from the Incisioni di diversi scheletri di animali series, ‘Liagno attempted to make his prints rather more than simple illustrations of various skeletons, although they are basically accurate in purely scientific terms.’ Furthermore, in the words of Philip Hofer, ‘Here the scientific, the macabre, and a baroque sense of decoration are all happily combined.’ Only a handful of preparatory drawings by Napoletano for the Incisioni di diversi scheletri di animali are known, however, including a drawing of the skeleton of a horse, in the Biblioteca Nazionale in Florence, and a study of a mouse skeleton in the Louvre.This sheet of studies of the skull and part of the skeleton of a horse reflects Napoletano’s close study of Johannes Faber’s collection of animal skeletons, and may also be tentatively related to his etching of the complete skeleton of a horse from the Incisioni di diversi scheletri di animali. Stylistically comparable pen and ink drawings of parts of animal skeletons by Napoletano are among the nearly one hundred drawings by the artist the Musée des Beaux-Arts in Lille, including a study of the skull of a pelican, a drawing of the skull of a pig or boar, and a sheet with two studies of the skull of a goat.The present sheet is first recorded, in the latter half of the 18th century, in the collection of the Earls Spencer at Althorp in Northamptonshire. At the Spencer sale in 1811, it was sold, together with another drawing, both as by Bartolomeo Passarotti (‘Passerotto. Two – studies of Horses’ bones, and of horses’ heads – both masterly pen’). The other drawing in the lot was probably the pen and ink study by Passarotti of a horse’s head and skull, bearing the Spencer collector’s mark, which was later in the collection of the 19th century antiquarian Francis Douce and is now in the Ashmolean Museum in Oxford.

Studies of the Skull and Skeleton of a Horse