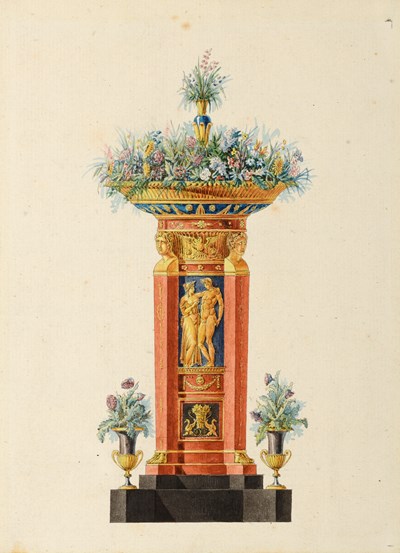 A Design for a Jardinière, with a Relief of Venus and Apollo Sold


Typical of Charles Percier’s refined and highly detailed watercolours, this design for a jardinière - commissioned by a certain Monsieur E. in Paris, who remains unidentified - can be dated to between 1801 and 1805. The drawing reappeared in Percier and Fontaine’s most influential work, the Recueil de décorations intérieures, published in 1812, a date that serves as a terminus ante quem for the design. The description of the jardinière in the Recueil, where it is illustrated together with a design for a small side table, states: ‘Tea table and jardinière, made to be isolated in the center of a room. These two pieces of furniture are executed in mahogany and bronze. One can recognize from the refinement and perfection of the work that they are from the workshop of MM. Jacob.’ Many years later, the art historian Henry Havard illustrated this same jardinière in his monumental Dictionnaire de l’ameublement et de la décoration, published between 1887 and 1890. As he wrote, ‘Meanwhile, on the advice of Percier, the cabinetmaker Jacob made a number of very remarkable pieces, as architecture and as ornamentation, the drawings of which have fortunately been preserved. We reproduce two of them here, and the opulence of these pieces of furniture, the care which Percier has taken of designing so many varied models, indicates that it was around this time that the jardinière completed its adaptation to elegant interiors and to take the place in Parisian houses which it has not ceased to occupy since then.’This watercolour by Percier was formerly in the archival collection of cabinetmaker François-Honoré-Georges Jacob-Desmalter (1770-1841), who oversaw one of the most important furniture workshops in Paris in the first quarter of the 19th century. A similar jardinière was produced by Jacob-Desmalter, after a design by Alexandre Dufour, for the Princesse d’Eckmülh at the Château de Savigny.

Provenance:
The archives of the workshop of François-Honoré-Georges Jacob-Desmalter, Paris.

A Design for a Jardinière, with a Relief of Venus and Apollo