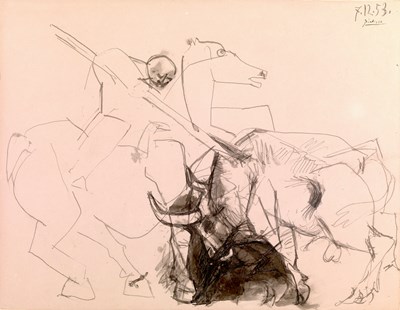 
The theme of bullfighting played an important and lifelong role in Pablo Picasso’s art, from his early childhood through to the 1960s. Bullfight scenes appear in Picasso’s first sketchbooks, and one of his very first paintings was a depiction of a picador on horseback confronting a bull, painted when the artist was nine years old. After settling in France, Picasso continued to visit bullfights on trips back to Spain. The last of these visits, in 1934, resulted in several works focusing on the theme of dying bulls, or the struggle between bulls and horses in the arena. (As Patrick Elliott has noted, ‘Picasso was particularly interested in the relationship between the bull and the horse, which he refigured as a metaphorical battle between the male and female. In his own private mythology, the bull and the horse, the painter and the model, the man and the woman, were locked together in a struggle.’) Following the Spanish Civil War, the artist chose to remain in exile in France, and never again visited the country of his birth. Nevertheless, Picasso’s attachment to the corrida continued to be all-powerful, made even more so by the fact that he was now unable to see bullfights in his own country. After the Second World War the artist began living in the South of France, and the revival of the bullfighting tradition in this part of the country is partly due to his advocacy and support. Picasso often attended bullfights at Arles, Béziers, Fréjus, Nîmes and, in particular, Vallauris, where in 1951 he became the patron of the annual summer corrida organized by his friend, the impresario Paco Munõz. As his friend and future biographer John Richardson, writing in 1964, noted of the artist, ‘The corrida has become more and more of a ritual for Picasso, so much so that on those Sundays when he cannot see a bull-fight he feels impelled to recreate one for himself on paper.’ In the 1950s and 1960s, bullfight subjects also came to dominate Picasso’s ceramic works and graphic output.Like the great Spanish artist Francisco Goya before him, Picasso found endless opportunities to express himself artistically through the theme of the bullfight. Indeed, as has been noted, ‘Francisco Goya and Pablo Picasso are among the few artists who have had the ability to transfer the experience of the dynamic and volatile bullfight spectacle to the demands of another art form...To isolate the subject of the bullfight helps uncover a path to Picasso’s Spanish soul. The bullfight appears throughout his career in all media, as naturalistic representation and as metaphor. The bullfight as spectacle is especially important in his work after World War II.’ Similarly, as Georges Boudaille has perceptively written of Picasso, ‘In his drawings one shares the artist’s passion for bullfighting; one communes with him in the enthusiasm of a great public spectacle and fiesta; one feels that one has suddenly understood what Picasso sees, feels, gets out of it...it would be difficult to affirm beyond doubt whether Picasso’s hero is the man or the beast, and with which of the two he sympathizes most.’Drawn in Vallauris in the autumn of 1953, this is one of Picasso’s largest drawings of a bullfight theme. Shown here is the picador, mounted on horseback, thrusting his pica (a lance or pike) into the neck of a charging bull. Interestingly, in the majority of his bullfight drawings, Picasso chose to depic not the torero or matador, but the picador mounted on horseback, armed with his lance. As his close friend and secretary Jaime Sabartés noted of Picasso, ‘for him, at least, the picador is the most important element of the fight...The picador’s profession is a very hard one. To keep the bull at bay with the pike requires great physical strength as well as a profound knowledge of bulls...Such is the picador as I find him in Picasso’s drawings. He is a man at war with himself, with the bull, with the ‘aficion’, with his family, and with life – and without caring for any other things.’ The art historian Jean Leymarie adds that, ‘The role of the heavily armed picador, with his quasi-sexual and sanguinary onslaught during the ‘suerte de picas’, is more pictorially rewarding than that of the matador. That is why the artist portrayed the picador first and foremost.’ Among closely-related drawings by Picasso is a large pen and ink wash drawing of a picador lancing a bull – of similar dimensions to the present sheet and dated two years earlier, on March 5th, 1951 - which shared the same provenance as the present sheet until 1990. The earlier drawing differs from the present sheet, however, in its somewhat more simplistic, childlike rendering of the protagonists. This large and impressive drawing of The Picador (Le cheval de picador cabré), which has remained in the same private collection since the year after it was drawn, is among the most powerful and potent studies of the bullfight to be found in Picasso’s later work. The sheer ferocity of the bull is given particular emphasis in the frenzied lines of ink and wash at the lower centre of the sheet, which are contrasted with the more schematic rendering of the picador and his mount. As Jaime Sabartés has aptly commented, ‘No one has seen a bull exactly as Picasso sees him, as he displays him. His bulls are real bulls; bulls, not oxen; wild creatures, vibrant with life and with incalculable strength; proud, courageous animals with ferocious impulses – the true image of a bull, translated from the artist’s memories of all the bullfights that he has witnessed.’