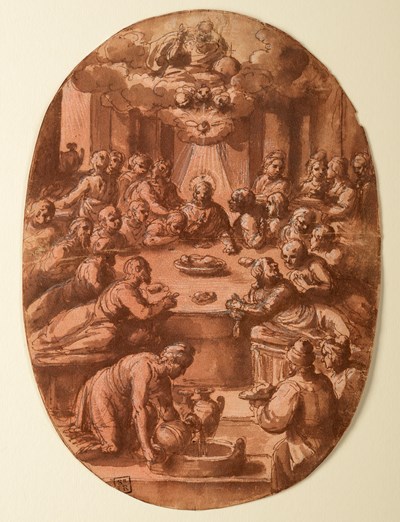 
An early drawing by Cesare Rossetti, the present sheet can be compared stylistically with a study of Christ at the Column in the British Museum and a large drawing of The Crucifixion, sold at auction in 1997, as well as a drawing of The Virgin and Child in Glory with God the Father and Angels and Saints which was on the art market in Paris in 2006. Similar drawings by the same hand include a study of Solomon Receiving the Queen of Sheba, in the Art Institute of Chicago, and a Martyrdom of Saint Peter at Christ Church in Oxford. This drawing bears the collector’s mark of the 18th century painter Sir Joshua Reynolds (1723-1792). The leading portrait painter in England, Reynolds’ success and fame allowed him to assemble one of the largest collections of paintings, drawings and prints of his day. His collection of several thousand drawings, mostly Italian works of the 16th and 17th centuries, was dispersed in two auctions in London in 1794 and 1798. The present sheet later entered the collection of D. Kaïeman (1796-1857), a councillor at the court of appeal in Brussels, whose collection of 1,371 drawings was dispersed at auction in Paris in 1858.