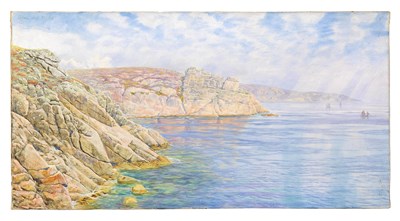 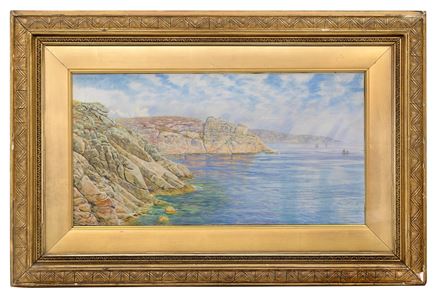 
John Brett made his first visit to Cornwall during the course of his honeymoon in September 1870, and he returned again in 1872 (when he made his first visit to Land’s End), 1873, and 1876, when the Brett family rented a cottage for the summer at Bass Point and the artist explored the south coast of Cornwall. Brett continued to make regular painting expeditions to Cornwall, with his last visit in 1899, and views of the rugged granite cliffs of the Cornish coast came to be a particular favourite motif of the artist. As the artist’s great-grandson has noted, Brett ‘left over 200 known views of the coastline from Fowey in the east to Bude in the north, painted over thirty years, in which he recorded with Ruskinian precision and Pre-Raphaelite intensity of colour its varied beauties, revelling in the diverse moods of sea and sky, and the majesty and grandeur of the cliffs.’ This painting was made during Brett’s stay in Cornwall in the summer of 1880, when he was based at Porthgwarra and Sennen, near Land’s End. By this time the artist was working exclusively on canvas, having given up painting on prepared millboards in 1878. Like all of Brett’s oil sketches, the present canvas is unsigned - the artist only signed his finished exhibition pictures - but is inscribed with the date and location depicted. The view here is taken looking eastwards towards the rock formation known as Treryn Dinas, which incorporates the Logan Rock. As the Brett scholar Christiana Payne has noted, ‘Brett was not attracted by the rural picturesque; it was the natural elements, the rocks, the sea and sky, which drew him to the coast.’This view of Logan Bay is painted so thinly in oils that it has the appearance of watercolour. As Payne has also written, while in Cornwall ‘Brett was making sketches both in oil and in watercolour, as if uncertain which medium was the more appropriate. Watercolour was suited to the fluid movements of the sea, the transparent sky and the reflections from wet sand, but oil was more successful in conveying the textures of the rocks, which were becoming an increasing preoccupation.’The present work retains its original period frame, of a particular type used by Brett for most of his works between 1875 and 1895. With its distinctive style of moulding incorporating a zigzag pattern infilled with triangular palmettes, the frame was known as a ‘Dolman’ frame, and was manufactured specifically for Brett by the leading firm of framemakers Dolman & Co. of London, who also worked for the National Gallery and for such artists as Lawrence Alma-Tadema and Hubert van Herkomer.This painting was bought from John Brett by Sir Thomas Lane Devitt, Bt. (1839-1923), a friend and major patron of the artist. Devitt was a shipping magnate and the chairman of Lloyd’s Register of Shipping, and in 1924 was given a Baronetcy in honour of his services to shipping and nautical charities. Devitt’s collection included several works by Brett, (including the painting Echoes of a Far-Off Storm, which he presented to the Guildhall Art Gallery in London in 1918), as well as works by Constable, Gainsborough, Landseer, Lawrence and Waterhouse. Devitt had his portrait painted by John Singer Sargent in 1904, and also commissioned works from Frank Brangwyn. In 1882 Thomas Devitt lent this painting, together with four other views of Cornwall by Brett, to the second Whitechapel Fine Art Exhibition, established the previous year by the vicar of the church of St. Jude’s in Whitechapel, Canon Samuel Augustus Barnett. In promoting these free annual exhibitions of contemporary art, Barnett hoped to ‘educate people so that they might realise the extent and meaning of the past, the beauty of nature, and the substance of hope.’ (In the catalogue of the 1882 exhibition, in which each picture was described in terms intended for the layman, it was noted of Logan Bay that ‘The water has made itself into a mirror for the rocks and sky.’) The immense success of these annual exhibitions, which drew thousands of visitors, led Barnett to advocate for the establishment of a permanent exhibition space in the East End of London, and led to the founding of the Whitechapel Art Gallery in 1901. The following year, a few weeks after Brett’s death, Devitt lent the same group of Cornwall paintings, including the present work, to the Spring Exhibition at the Whitechapel Art Gallery.

Provenance:
Bought from the artist for £70 by Sir Thomas Devitt, Bt., LondonHis posthumous sale, London, Christie’s, 16 May 1924, part of lot 51 (sold for 20 gns. to Leggatt Bros.)Howson Foulger Devitt Thence by descent until 2015.