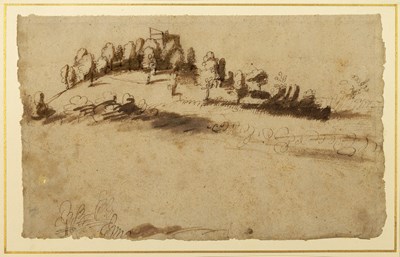 Landscape with a Farmhouse on a Hillside Sold


The present sheet was part of a group of twelve drawings, all part of a now-dismembered sketchbook used by Cibo, which appeared on the London art market in 19718. The flyleaf of the sketchbook was inscribed ‘Libro 24’ and dated 24 October 1567, while some of the drawings are dated 1567 or 1568. A long inscription in the sketchbook noted that the landscape drawings contained in it were made during walks in the countryside, and many of the sheets were further inscribed with the names of the buildings shown or the location depicted.

Provenance:
Part of an album of landscape drawings by Cibo, with provenance as follows:Cardinal Gaspari(?)Rafael Valls, LondonPurchased from him in July 1969 by P. & D. Colnaghi, LondonThe present sheet bought in 1971 by Yvonne Tan Bunzl, LondonPrivate collection, New York.

Landscape with a Farmhouse on a Hillside