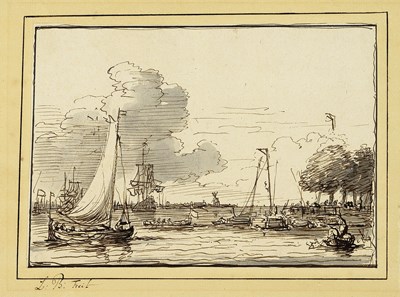 
Prolific as a draughtsman, Ludolf Bakhuizen produced, in the words of one recent scholar, ‘swift and lively sketches in pen and brown ink and gray wash, which sometimes served as preparatory studies for paintings’ - of which the present sheet is a fine example - as well as more finished drawings, which were sold to collectors as autonomous works of art, and were highly valued. In his drawings, Bakhuizen was particularly fond of the compositional device of a large ship in the foreground at one side of the composition, with other shipping in the middle ground and far distance. (According to Houbraken, he often worked from a boat, the better to capture the effects he was after.) Due to the fact that his style as a draughtsman remained relatively unchanged throughout his career, it is often difficult to place undated drawings within Bakhuizen’s oeuvre.