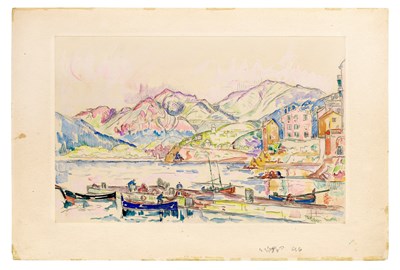 View of a Mediterranean Port (The Bay of Ajaccio, Corsica?) Sold


This view depicted in this large watercolour has tentatively been identified as the bay of Ajaccio, on the western coast of Corsica. If so, the watercolour would date from 1935, the last year of the artist’s life, when he made his only visits to the island. Signac visited Ajaccio in February 1935, and again on his return to Corsica in May and June. As Marina Ferretti Bocquillon has written of this trip to Corsica, the final journey of Signac’s career, ‘Travelling from one harbor to the next with the energy of a young man, he made his last Mediterranean notes. Only two months before his death on August 15 he had been working without respite on a dazzling series of watercolors.’

View of a Mediterranean Port (The Bay of Ajaccio, Corsica?)