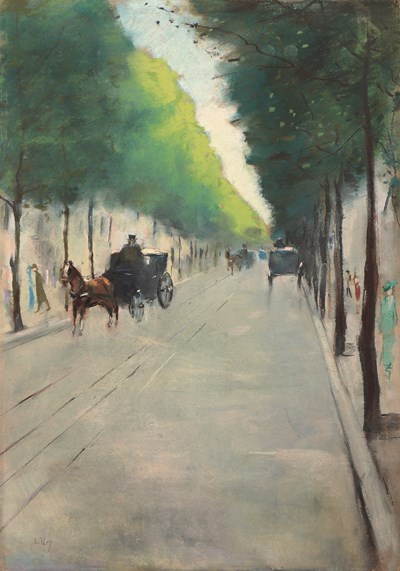 A Road in the Tiergarten, Berlin Sold


Lesser Ury is perhaps best known, and most highly regarded, for his works in pastel. Indeed, he may be noted as one of the finest pastellists of the late 19th and early 20th centuries. Datable to 1915, the present pastel depicts a view in the Grosser Tiergarten, a large park in the centre of Berlin. Its innovative composition is common to many of Ury’s street scenes, with the viewer placed at the level of the street; indeed, seemingly on the road itself, rather than at a window looking down onto it. A closely related lithograph of c.1920, of considerably smaller dimensions than this pastel, was published in an edition of thirty impressions, while a similar but reversed composition is found in an etching of about the same date.The present sheet is accompanied by a certificate from Dr. Sybille Gross, dated 20 April 2014.

Provenance:
Ludwig and Hedwig Wiener, Breslau and LondonThence by descent to a private collection, England.

A Road in the Tiergarten, Berlin