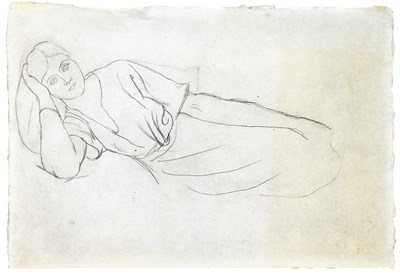 
Beginning in 1914, Pablo Picasso began to experiment with a Neoclassical style that was radically different from the explorations in Cubism he had been engaged in for the previous seven years. Over the next decade, while continuing to work in a Cubist vein, Picasso began to concurrently explore a more classical mode of expression, inspired by the paintings and drawings of the 19th century French master Jean-Auguste-Dominique Ingres, whose work was to be a lifelong touchstone for the Spanish artist. To begin with, this new Neoclassical manner was largely reserved for portraiture. As one scholar has noted, ‘During the remainder of the second decade of the twentieth century, portraiture would be the focus of Picasso’s germinating Neoclassicism, until it expanded to encompass the full variety of his subjects, and Cubism temporarily abated...Certainly, Picasso’s Neoclassicism became almost synonymous with portraiture during the years 1915 to 1920.’ Probably drawn in Picasso’s studio in Montrouge in 1918, this refined drawing is a portrait of the artist’s first wife Olga Khokhlova (1891-1955), a dancer with Sergei Diaghilev’s Ballets Russes. Picasso and Olga met in Rome in February 1917; Picasso had been commissioned by Diaghilev to create designs for the one-act ballet Parade, and he was in Rome, where the Ballets Russes were performing, to start work on the project. The daughter of a colonel in the Corps of Engineers of the Russian army, Olga Khokhlova had joined the Ballets Russes in 1911, at the age of twenty. Although never rising to the position of prima ballerina, she had significant roles in several of the company’s productions, including Parade, which premiered in Paris in May 1917. Picasso and Olga were engaged by the end of that summer, and were married in July 1918. As might be expected, Olga appears in a significant number of Picasso’s drawings of this period. As the artist’s biographer John Richardson has pointed out, ‘Her cool, melancholy beauty and lithe dancer’s body would prove a perfect vehicle for his emergent classicism.’ Most of Picasso’s early portrait drawings of Olga display the strong influence that Ingres’s classical draughtsmanship had on his own style at the time. Furthermore, as Douglas Cooper has noted, ‘in many paintings and drawings executed by Picasso between 1917 and 1919 – the first portraits of Olga, some self-portraits and many other compositions – the pure linear idiom, the smooth handling of form and the regular well-defined contours indicate an evident desire to test his ability in friendly rivalry with Ingres.’Although drawn in 1918, the present sheet repeats the pose of Olga found in two pencil drawings made the previous year in Barcelona, both of which depict her lying on a couch with a small teddy bear on her lap; one of these is part of a sketchbook in the Musée Picasso in Paris, while the other is in the collection of the artist’s granddaughter Marina Picasso. It would appear that Olga was often to be found resting in this relaxed manner, and was portrayed by Picasso accordingly. A very similar pose is found in a later pencil drawing of Olga lounging on a divan, drawn at Juan-les-Pins and dated the 23rd of September 1920, which is today in the collection of the Musée Picasso in Paris. The motif of a reclining woman was to be one of Picasso’s major themes throughout his later career. The languid pose of Olga in the present sheet, however, may also be due to an event about which relatively little is known; a serious injury which she had sustained, and from which she took five months to recover. In April 1918, shortly before Picasso and Olga were due to be married, she gravely damaged her foot, possibly aggravating an earlier ballet injury, and was unable to move her leg. An operation was required, and for a few weeks her right leg was encased in plaster, which was only removed shortly before the postponed wedding on July 12th. For several weeks afterwards, Olga required a cane to walk around, and she was not fully recovered until late September. As a result, she often had to spend much of her time in a reclining position, so as not to put too much weight on her leg. As Richardson has noted of this period, ‘Since Olga was confined most of the time to an armchair or a chaise longue, Picasso could draw her all he wanted. She enjoyed this ritual; it calmed her when she was upset. However, she always keeps her distance in these portrayals, and he always keeps his libido buttoned. Sometimes he depicts Olga as a noble, Ingresque beauty; sometimes less formally, as a soulful young wife; sometimes as a cubist construction.’ Perhaps as a result of her injury, Olga never danced on stage again.Writing of the drawings Picasso made of Olga in the early months of their relationship, John Richardson notes, ‘Charming drawings in the pages of Picasso’s sketchbooks reflect their ever increasing intimacy...And yet, for all their love and warmth, these drawings reveal no trace of the predatory physicality that would make Picasso’s images of Olga’s successor, Marie-Thérèse, so insidiously sexy.’ Some five years after their marriage, however, Picasso’s artistic obsession with Olga began to fade, and, apart from a few drawings made in 1928, she disappears almost entirely from the artist’s work after 1923.

Provenance:
The estate of the artist (Inv. 2696)By descent to the artist’s granddaughter, Marina Picasso, Cannes, Geneva and New York.