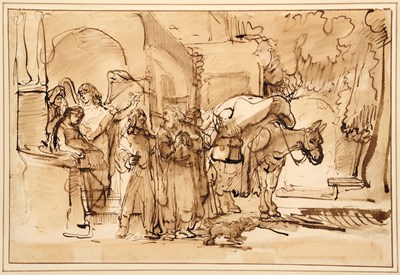 The Departure of the Young Tobias Sold


Werner Sumowski dated the present sheet to the second half of the 1640s, and compared it stylistically with Ferdinand Bol’s drawings of Abraham Bowing Before the Lord and an Angel in the Victoria and Albert Museum and Abraham and the Angels in the Boijmans-van Beuningen Museum in Rotterdam. As Felice Staempfle has noted of Ferdinand Bol’s drawings, the composition of his history subjects often ‘adheres to a formula...with bold, highly abstract forms on the outer edges of the sheet, often drawn in reed pen, and more carefully rendered and detailed figures at the center, executed with a thinner pen.’ Bol treated episodes from the book of Tobit in a handful of finished compositional drawings, of which this is one of the finest.In his seminal 1957 study of the drawings of Fedinand Bol, Wilhelm Valentiner compared the present sheet in particular with a drawing of The Departure of the Prodigal Son, formerly in the Julius Weitzner collection in New York. As Valentiner points out, with reference to both the present sheet and the Weitzner drawing, ‘The young Tobias can be compared in pose to the prodigal son, while the expression of the woman comes as near to Rembrandt as only Bol could achieve. Characteristic of him are the angel and the two women in the doorway; the background with the restless curves in the left corner and the many divergent hatchings to the right and also the baroque forms of the building itself, with the shadows washed in bistre, recall the treatment of the drawing of The Prodigal Son. Both drawings belong to the best we know of Bol.’ The present sheet belonged to the German scholar Wilhelm Reinhold Valentiner (1880-1958), a noted art historian and curator who served as the director of the North Carolina Museum of Art from 1955 until his death. This drawing was one of several works which he bequeathed to the museum.

The Departure of the Young Tobias