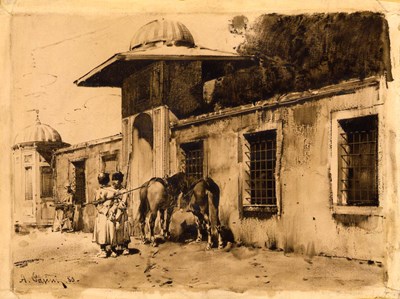 Circassian Cavalrymen Outside a Gate Sold


This is a depiction of a type of subject that Alberto Pasini treated in paintings, drawings and lithographs throughout his career. (Indeed, in 1880 - the date of this drawing - he exhibited a large canvas entitled Cavaliers circassiens, attendant leur chef à la porte d’un monument byzantin at the Salon des Artistes Français in Paris.) Pasini’s interest in Circassian soldiers as subjects for his paintings is a reflection of a fascination for these singular people shared by many visitors to the Near East. The term ‘Circassian’, derived from the Turkish word ‘Çerkes’, has long been used to refer to the peoples of the Northwestern Caucasus, notably the Adyghe, the Abkhaz and the Ubykh. With the Tsarist Russian conquest of their territory in the first half of the 19th century, many Circassians were deported to Turkey, where Pasini would first have seen them. A fierce people with a warlike ethic, greatly admired for their courage in battle, many Circassians became military leaders in Turkey, the Middle East and Russia after the diaspora. Circassian men wore a cherkessa; a long, fitted coat with pockets for ammunition cartridges across the chest, together with a round fur hat and knee-high leather boots. Their exotic appearance was described by one 19th century visitor to the region; ‘I was first struck with their fine martial appearance, athletic forms, regular features, and the proud consciousness of freedom displayed in every glance and movement. The most accomplished cavalier in Europe could not sit his horse with greater ease and grace than did these wild mountaineers; and the symmetry of the noble animals that carried them I have never seen equalled, except in our own country...The usual dress of a Circassian warrior of all classes is a tunic resembling a military Polonaise, without a collar, closely fitted to the body, and descending to the knee, secured around the middle by a leather girdle, ornamented, according to the wealth or fancy of the wearer, with gold or silver, in which are stuck a pair of pistols...In addition to this, the Circassian is armed with a light gun, slung across the shoulder, and a sabre suspended by a silk cord in the Turkish fashion...Hence, a Circassian, whether on foot, or on horseback, is at all times completely armed.’

Circassian Cavalrymen Outside a Gate