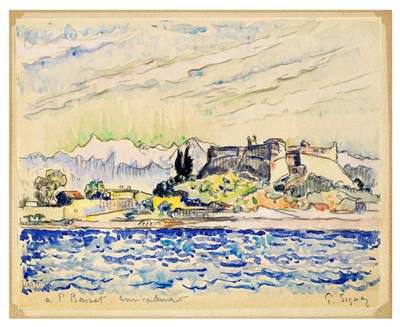 
This luminous watercolour would appear to depict the coastal town of Calvi in Corsica. Paul Signac made both of his only trips to Corsica in 1935, the last year of his life, having earlier written to his wife Berthe that ‘I should like to go and see this island and work there before I die...It would renew my repertoire of pictures, and I could use it.’ In February 1935 Signac visited the towns of Calvi, Ajaccio, Propriano, Bonifacio and Bastia. He returned in May and June, travelling south along the east coast of the island from Saint-Florent and L’Ile-Rousse towards Calvi, Ajaccio and Propriano. As Marina Ferretti Bocquillon has written of this trip to Corsica, which was to be the final journey of Signac’s career, ‘Travelling from one harbor to the next with the energy of a young man, he made his last Mediterranean notes. Only two months before his death on August 15 he had been working without respite on a dazzling series of watercolors.’