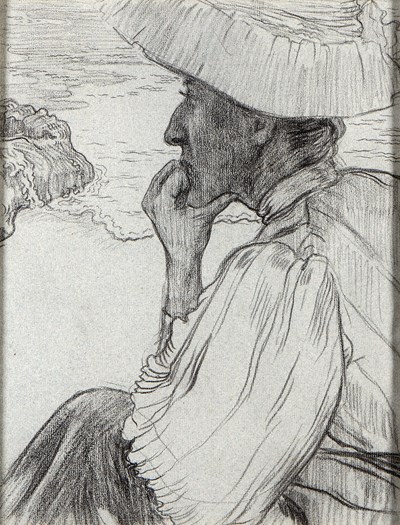 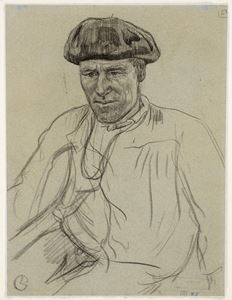 
This drawing depicts Gabrielle Wenger, née Questroy (1854-1944), the mother of the artist’s future wife Marthe, seated on the cliffs above Camaret-sur-Mer, on the Crozon peninsula overlooking the sea. When Lacombe made this drawing in 1895, Gabrielle was a widow; her first husband Adolphe Wenger had died two years earlier. Gabrielle Wenger shared with Lacombe an interest in music; she hosted musical soirées and concerts at her home in Versailles, which the artist regularly attended, and was herself a talented pianist. She was also one of Lacombe’s patrons, commissioning from him a series of decorative wall paintings for her house in Versailles in 1893. Lacombe made several drawings of Gabrielle Wenger; one such example, drawn in coloured chalks and probably executed a year earlier than the present sheet, is in a private collection. A large, full-length pastel portrait of Mme. Wenger seated at a piano, dated 1896, is in the collection of the Musée Lambinet in Versailles.The drawing on the verso of the present sheet is a portrait of a Breton sailor named Piriou, who helped Lacombe sail the Greska, the boat which the artist kept at Camaret. Lacombe produced a number of drawings of Piriou, whose wife and daughter were also the subject of drawings that were originally in the same Breton sketchbook as the present sheet. This sketchbook was made up of sheets of blue paper, with most of the drawings datable to 1895 and depicting Breton subjects. Several drawings were removed from this sketchbook in the 1970s, of which the present sheet is one, and the remainder of the now-unbound Breton sketchbook entered the collection of the Louvre in 1983.

Provenance:
Once part of a sketchbook of mainly Breton subjects by Lacombe, with some sheets removed after 1965Shepherd Gallery, Associates, New York, in 1974Acquired from them by Mr. and Mrs. Arthur G. Altschul, New YorkGalerie Hopkins-Custot, ParisAcquired in 2003 by the Triton Collection Foundation, The Netherlands.