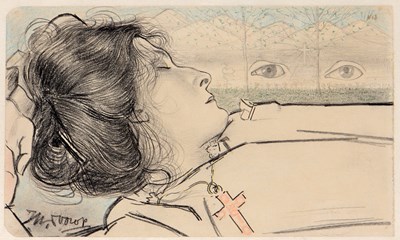 
The title given to this late drawing by Jan Toorop, De Droom der Zeven Heuvelen (The Dream of the Seven Hills) is found in the caption of a reproduction of the work in the book Het boek der koningin, published in 1919. The title may perhaps refer to a dream about the city of Rome, the capitol of the Catholic faith, which was built on seven hills, but this must remain conjectural. Nevertheless, the religious atmosphere in this drawing is palpable.Drawn c.1913-1914, this drawing depicts the poet and painter Miek Janssen (1890-1953), who was to be Toorop’s devoted friend and muse for the last decade and a half of his life. A native of Oosterbeek, Wilhelmina Martha Catharina Maria Theresia (known as ‘Miek’) Janssen met Toorop in his Nijmegen studio in April 1912 (a meeting she later described as ‘one of the greatest moments of my life’) and soon became very close to the artist. While it is certain that they had some kind of relationship, it was kept largely secret, and the extent of it remains a mystery. Toorop illustrated a number of Janssen’s works of poetry, notably Aan der einder (On the Horizon), which was published in 1915 with several of his drawings. Janssen was deeply religious and her relationship with Toorop had strong religious overtones; the two made a pilgrimage together to Lourdes in 1919, when the artist’s health was failing. Devoted to Toorop even after his death, Janssen published several books about the artist between 1915 and 1933, many tinged with a degree of hagiography.Toorop produced several portrait drawings of Miek Janssen, notably a black chalk drawing of the same period as the present sheet, in the Gemeentemuseum in The Hague, while a chalk and metalpoint drawing of her is in the Rijksmuseum in Amsterdam. Janssen also modelled for such works of this period as The Prayer (Het Gebed) of 1914, a large drawing in pastel and black chalk today in the Stedelijk Museum in Amsterdam. The first owner of this drawing was the Dutch art historian, painter, lecturer, critic and publisher H. P. (‘Henk’) Bremmer (1871-1956), who may have received the drawing as a gift from the artist. One of the foremost art critics and connoisseurs of his day, Bremmer played a significant role in introducing contemporary art to a wider audience. In his role as an art advisor, Bremmer worked closely with Helene Kröller-Müller, one of the wealthiest women in Holland, whose substantial art collection - including a number of important works by Toorop – became the nucleus of the Kröller-Müller Museum in Otterlo. Bremmer’s own collection included works by Auguste Herbin, Piet Mondrian, Odilon Redon and Vincent van Gogh, as well as both Jan and Charley Toorop.

Provenance:
Hendricus Peter Bremmer, The HagueBy descent to a private collection, HollandAnonymous sale (‘The Property of a Descendant of H. P. Bremmer’), Amsterdam, Christie’s, 1 December 1998, lot 211Kunsthandel Studio 2000, BlaricumAcquired from them in 2004 by the Triton Collection Foundation, The Netherlands.