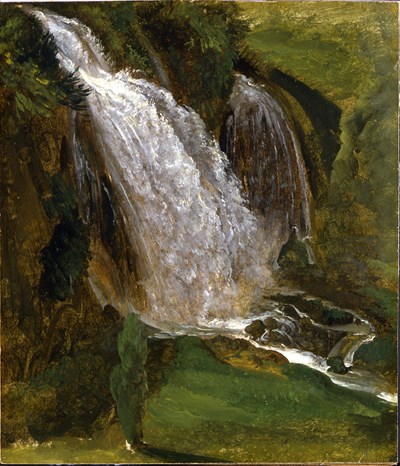 A Cascade at Tivoli Sold


Like many artists of his generation working in Rome, Simon Denis was attracted to the picturesque setting of Tivoli, only thirty kilometres from the city. With its Roman temples, a large waterfall - the Grande Cascata - and a number of smaller waterfalls, known as cascatelle, the site was popular with artists throughout the 18th and 19th centuries. Denis seems to have first visited the area in 1789, in the company of Lebrun’s wife, the painter Elisabeth Louise Vigée-Lebrun, and her daughter Julie, on a trip organized by François-Guillaume Ménageot, the director of the Académie de France in Rome. As Vigée-Lebrun noted in her Souvenirs, ‘M. Ménageot then took me to Tivoli with my daughter and the painter Denis; it was a charming party. First of all we went to see the fountains, which I found so enchanting that the men had difficulty tearing me away. I drew them in pastels, wishing to catch the rainbow colours of these magnificent spouting waters.’ Denis is also known to have visited Tivoli in 1793 and 1801, when dated oil sketches of the cascatelle survive, but may well have made several more trips to the area during his long stay in Rome between 1786 and 1804, when he settled in Naples.On his trips to Tivoli, as he had throughout his career, Denis produced a large number of freely painted oil sketches made en plein-air; works which, like those of his contemporary Pierre-Henri de Valenciennes, prefigure the widespread interest in plein-air sketching among artists in the 19th century. In such sketches as the present sheet, Denis studied individual landscape motifs and attempted to capture particular effects – in this case the flow of falling water – so as to gain a thorough understanding of the various elements within a landscape composition. The application of touches of pure white paint in the mass of rushing water is characteristic of the artist’s technique, and can be seen in other oil sketches of the cascades at Tivoli by Denis, such as that in the Gere collection at the National Gallery in London. Although such sketches were intended primarily as exercises, several were worked up into more finished painted compositions, and some were sent to the Paris Salon for exhibition. Denis also received a number of commissions from private collectors for paintings of the falls at Tivoli, for which these oil sketches may have been used as reference.Unusually among those artists who also produced plein-air works of this type, Denis almost always signed and inscribed his oil sketches with details of where they were painted, as in the present sheet. The numbering on each of the sketches, however, appears to have been added later by one of the artist’s descendants, the highest number recorded being 160. If the numbering is in some sort of chronological sequence, the early number on the verso of the present sheet would suggest that it may have been one of the first views of Tivoli by the artist.

Provenance:
By descent in the family of the artist to a private collection, France.

A Cascade at Tivoli