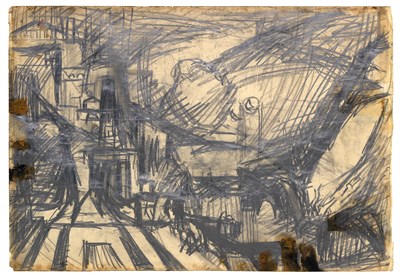 Study after Turner’s The Parting of Hero and Leander [recto]; A Building Site [verso]


Frank Auerbach made drawings after Old Master paintings in the collection of the National Gallery in London throughout much of his career, beginning in the late 1940s. He had entered St. Martin’s School of Art in 1948, and its close proximity to the National Gallery meant that he was able to make daily or weekly visits to the museum to draw after the Old Masters; a practice he maintained until the late 1980s. As Robert Hughes has written, ‘Auerbach’s attachment to the National Gallery in London is deep and almost fanatical; throughout the 1950s, 60s and 70s he and his friend [Leon] Kossoff kept up what struck other artists and students as the quaint habit of going to Trafalgar Square at least once a week to make drawings from certain paintings there.’1 Among the paintings Auerbach has copied in the National Gallery are works by Caravaggio, Claude, Constable, Degas, Gainsborough, Goya, Hals, Poussin, Rembrandt, Rubens, Seurat, Tiepolo, Titian, Turner and Veronese. Referring to his frequent trips to the National Gallery, Auerbach has said that ‘it reminds me of what is required. All the great painters: there’s a unity like a great wind blowing everything together, you get a glimpse of that.’ In another interview, he noted, ‘My most complimentary and my most typical reaction to a good painting is to want to rush home and do some more work. When the bus services were better I used to go to the National Gallery more frequently, just go and come back. And I find that towards the end of a painting I actually go and draw from pictures more to remind myself of what quality is and what’s actually demanded of paintings. Without these touchstones we’d be floundering.’ And, in another conversation, he added, ‘I have hardly ever drawn from a modern picture – I know how it’s made. When it is one by an old master, I know they are marvellous, but I can’t see what is the secret that makes them so.’ Datable to around 1952-1953, this is one of relatively few surviving early drawings by Frank Auerbach. The recto of the sheet contains a very free and spirited copy after J. M. W. Turner’s painting of The Parting of Hero and Leander, exhibited at the Royal Academy in 1837 and today in the collection of the National Gallery in London.The verso of this drawing, which is squared for transfer, depicts a building site in London; a theme that occupied the artist for much of the 1950s, at the start of his career. Auerbach was fascinated by the intense program of building and reconstruction being undertaken in post-war London in the late 1940s and 1950s, following the devastation caused by the Blitz. As he recalled in 2007, ‘It was almost fortuitous that just after the war, when I did these things, London was a ruin, and so I painted bomb sites and building sites and so on, which looked absolutely marvellous: grand mountain landscapes all over London.’ Auerbach painted an important series of building site pictures between 1952 and 1962, and, in keeping with his practice for much of his later career, often turned to the study of paintings in the National Gallery to help him work through his ideas and resolve problems in his own compositions. As he has said, ‘I’m not copying a picture, I’m trying to gain some sort of inspiration from the fact that somebody’s succeeded in grasping something that seems relevant, where I have at that point failed to grasp it in my own picture.’Both sides of this drawing can be related to the artist’s interest in painting building sites in London. As Catherine Lampert has noted of the present sheet, ‘Auerbach’s Study after Turner’s The Parting of Hero and Leander (c.1953), which is a drawing based on a work in the National Gallery, puts emphasis on the grand buildings of Abydos, with spectators lined up on the dock, and the storm over the Hellespont in which Leander drowned. A gridded building-site sketch on the verso curiously transports the eye into deep space; the ideal architecture and the lightning bolt in Turner’s painting is here a diagonal stroke that we read as a huge beam being cantilevered into position.’Barnaby Wright has recently commented at length on the relationship between the recto and verso of this large drawing: ‘Auerbach’s exploration of London’s building sites was entwined at a more profound level with his experience of Old Master and Romantic painters in the National Gallery. In a surviving sketchbook page from this period we find a sketch of a building site on the verso of a study after Turner’s The Parting of Hero and Leander, which makes the connection explicit. Undoubtedly there would have been many other comparable studies from different paintings and building sites in sketchbooks that he has destroyed. Turner’s painting conjoined the motifs and painterly effects that contemporary viewers, when it was first exhibited at the Royal Academy of Art in 1837, would have associated with an expression of the sublime. Dramatic storms breaking over a turbulent sea are set amidst a treacherous-looking mountain landscape. A fantastical city (based upon the study of classical ruins) is stacked precariously upon the rocks, stretching up into the hazy mists of the sky. This all speaks of the sublime, ineffable experience of overwhelming terror and excitement that gripped the later eighteenth- and early nineteenth-century imagination. The energy of Auerbach’s study suggests that it also gripped him. It is clear that he understood the painting to be a battle between the structuring geometric forms of the architecture and the wild destructive forces of the storm-possessed elements...For Auerbach, the building sites were a contemporary equivalent of a sublime landscape – one that could inspire the fear, excitement and strangeness of an uncharted mountain terrain.’

Study after Turner’s The Parting of Hero and Leander [recto]; A Building Site [verso]