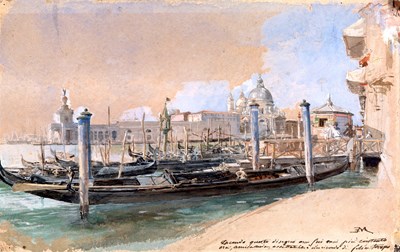 Venice: The Entrance to the Grand Canal, with Santa Maria della Salute and the Punta della Dogana seen from the Casa Fumagalli Sold


Ernest Meissonier first visited Venice in 1860, and returned there annually after 1879. As he recalled, ‘Ah, Venice! The pleasure of revisiting it is more intense each time. There everything appeals to the soul. There is only one thing to regret, - the impossibility of recording all that soothes and enchants one.’Drawn in 1886 and dedicated to the artist’s future second wife, this watercolour shows the view of the Grand Canal from the entrance to the Casa Fumagalli, where Meissonier stayed when he was in Venice6. It can be closely related to the later canvas of The Grand Canal, Venice, painted two years later in 1888 and today in the Musée d’Orsay in Paris. As Valéry Gréard has described the composition of the large painting, in his magisterial monograph on Meissonier, published in 1897: ‘Grand Canal, Venice. View from the entrance of the Casa Fumagalli, occupied by Meissoner. His gondola (with an awning) waits at the steps; other gondoliers hang about for customers. On the post a figure of the Virgin, where a lamp burns at night. A gondola crosses the canal towards the Dogana; on the left, the Church of the Salute and the pink buildings of the Seminary; the masts of ships in the Giudecca beyond.’ A closely related watercolour of the same view, which is closer in composition to the final painting and is likely to date from 1888, is in the Louvre.The present sheet bears a dedication to the artist’s second wife, Elisabeth Bezanson (1840-1898), his neighbour in Poissy and a close friend, whom he married in Paris in July 1889. The dedication may be trasnlated as ‘I was never more content than when working on this drawing, therefore, dear friend, accept it as a memento of happy hours.’

Provenance:
Given by the artist to Elisabeth Bezanson, later Mme. Ernest Meissonier, in January 1887.

Venice: The Entrance to the Grand Canal, with Santa Maria della Salute and the Punta della Dogana seen from the Casa Fumagalli