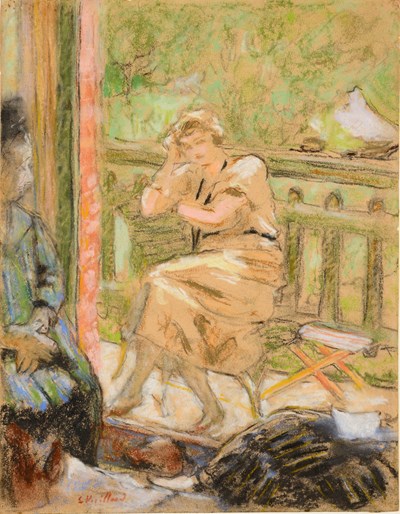 
Between 1917 and 1924 Edouard Vuillard spent some part of each summer at the Closerie des Gênets, a small house rented by him and his mother at Vaucresson, just to the west of Paris. This pastel drawing depicts the artist’s niece, Annette Roussel, seated on the balcony at the Closerie des Gênets, ‘framed by the French windows, against a background of foliage. On the left is Madame Vuillard; at the bottom right, a third woman of whom only the lower part of a brown dress is visible.’ Born in 1898 to Vuillard’s sister Marie and the painter Ker-Xavier Roussel, Annette Roussel was, since her infancy, the subject of paintings, drawings, pastels and photographs by the artist, who was very fond of her. As a young woman, Annette spent much time at the home of her uncle, to escape the tensions caused by the unhappy marriage of her parents. During the First World War, when her father was largely confined to a sanatorium in Switzerland, she was left in the care of Vuillard and his mother in Paris. She had ‘blossomed into an elegant and stylish young woman’, and continued to appear in many of Vuillard’s paintings.As Antoine Salomon and Guy Cogeval have described Annette Roussel, who would have been in her early twenties when this drawing was made, she was ‘a beautiful but often melancholy young lady...Vuillard was something of a second father to her, particularly during the First World War, and he never lost a chance to show how highly he thought of her...Vuillard also became Annette’s confidant. In her letters she wrote to her father, she would reel off a string of news in a rather humdrum manner. With her ‘dear little uncle’, on the other hand, she would tackle more general considerations...On countless occasions, she talks to the painter about her melancholy feelings: ‘I haven’t set foot outdoors[.] I spend my days reading and daydreaming of countries where there is no war and sunshine. I have just told myself that this is very bad for one’s health, but I have no courage[,] I am thoroughly sick of myself and of everyone else too. Luckily there is always hope, without it I would soon be in a state to drown myself in the lake.’’ Even after her marriage to the young painter Jacques Salomon, one of Vuillard’s most devoted admirers, uncle and niece continued to correspond regularly.Domestic interior scenes such as this, which often include members of Vuillard’s family and close friends, ‘are not intended as portraits, nor are they genre paintings in the true sense of the term. Rather, they are evocations of the private world of the artist’s personal experience...[and] provide a tantalizing view into a cloistered and rarefied world occupied almost entirely by women...Vuillard’s women are perpetually absorbed in their occupations and, with only rare exceptions, remain totally unconscious of the presence of the artist and the gaze of the viewer.’