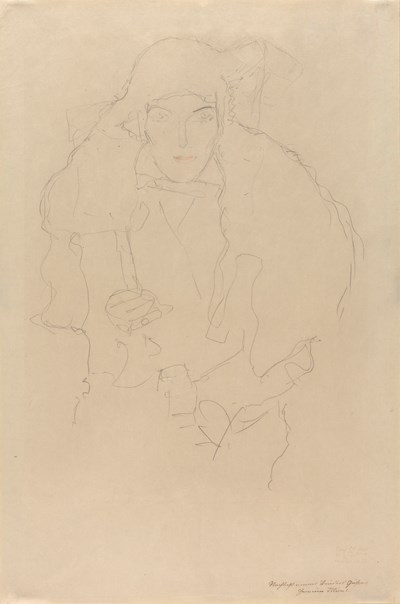 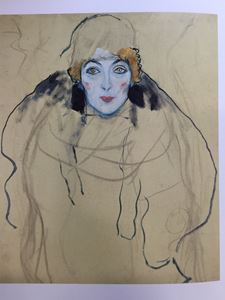 Portrait of a Woman Sold


This large drawing is closely related to an unfinished, bust-length oil portrait by Gustav Klimt of an unknown woman [see comparative image], painted around 1917-1918, towards the end of the artist’s life. One of several incomplete canvases found in Klimt’s studio at the time of his sudden death in February 1918, the painting is today in the collection of the Lentos Kunstmuseum in Linz, Austria.The Linz painting has been described as ‘one of [Klimt’s] most striking portraits of women. The ghostly blue skin tint and the intense gaze of pale yellow irises under arched brows give a disturbing Expressionist exaggeration to her features...Initially, Klimt uses the brush like a pencil on crayon on paper, freely sketching the broad outlines of the figure on canvas before turning in more detail to the facial features.’ The painting evinces something of the effect of a drawing, and sheds some insight into Klimt’s working process, notably the way in which he seems to have begun by painting the sitter’s face, while leaving much of her dress and the background only briefly worked in. The identity of the sitter of the Linz portrait, and likewise of this drawing, has, however, thus far remained a mystery. In her catalogue raisonné of Klimt’s drawings, Alice Strobl identified a handful of drawings as preparatory studies or first ideas for the Linz portrait, of which the present sheet offers perhaps the most direct comparison. One drawing related to the Linz painting is today in the Albertina in Vienna, another was formerly in the Serge Sabarsky collection in New York and was recently on the art market, while four others are in private collections. These drawings all show an unidentified woman wearing a hat, fur stole and a long dress. Some of the drawings depict the sitter either standing or sitting, which would suggest that Klimt may have originally intended the painting as a full-length composition.As has been noted, ‘Like many of the paintings begun in the last year of Klimt’s life...the Linz Portrait of a Woman is unfinished, yet appreciated as an autonomous work of art today...Indeed, Portrait of a Woman is sufficiently realized to reflect a move by Klimt toward expressive freedom in his late portrait painting, perhaps influenced by the younger artist Egon Schiele.’

Portrait of a Woman