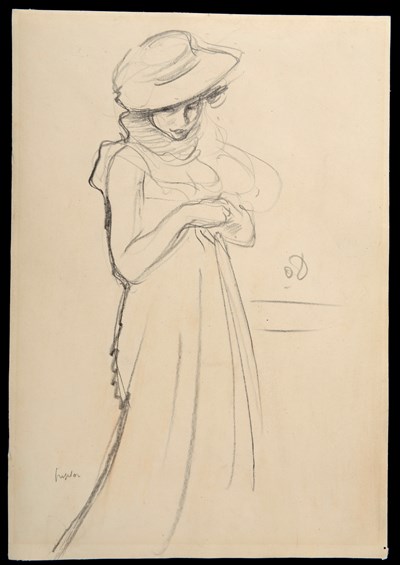 Study of Peggy with a Hat Sold


The present sheet is a portrait of Peggy Macrae, a professional model who appeared in Peploe’s work between 1906 and 1910, and also posed for several of his contemporaries in Edinburgh, including Cadell. As his friend and fellow artist Stanley Cursiter recalled of Peploe, who moved into a new studio in 1905, ‘He had a new model, Peggie MacRae, a charming, witty, and attractive girl, who had the rare gift of complete grace which made her every movement interesting; she dropped naturally into poses which were balanced and harmonious and, better still, she immediately impersonated the figure she was asked to represent. She selected the artists for whom she sat with some discrimination...Peggie MacRae fitted perfectly into the pale grey, polished black and the white sofa of Peploe’s new setting, and she was the original of many of the figure pictures in pink, grey, and black, and the pale pictures in muted whites, that he painted at this time.’ As a later biographer has written, the artist ‘found a new, inspirational model in Peggy Macrae...She had a poise and grace which suggested many poses to Peploe.’ Peggy Macrae eventually married and settled in California.A closely related pencil drawing by Peploe, of similar dimensions, is in the collection of the Kelvingrove Art Gallery and Museum in Glasgow. Peggy Macrae also wears a similar wide-brimmed hat in Peploe’s painting The Yellow Dress of c.1910, in a private collection. The Yorkshire collector Wyndham T. Vint assembled a large and varied group of paintings and drawings by British artists of the 19th and 20th centuries. Vint also owned a painted portrait of Peggy Macrae by Peploe, formerly with Peter Nahum in London and now in a private collection.

Study of Peggy with a Hat