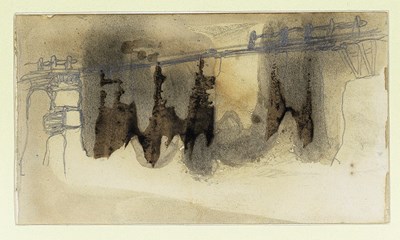 Landscape with a Bridge, Guernsey Sold


The present sheet was once part of a small pocket sketchbook of sixty-one pages, used by Victor Hugo between the 17th of June and the end of August or beginning of September 1856, during his fifteen-year period of exile in Guernsey. Of British manufacture, the sketchbook measured approximately 9 x 15 cm. and was dated and inscribed by Hugo on the inside front cover: ‘17 juin 1856 / (pris mon premier bain a Guernesey, a Fermain-bay, le vendredi / 27 juin 1856)’ together with a list of dates, including ‘21 juillet ma fête’, referring to his saint’s name day. Since his arrival in Guernsey in 1855, Hugo had adopted the practice of carrying with him two types of small notebooks, or carnets. The first was a carnet de comptes, used mainly for accounts and household affairs, and was akin to a diary. The other type of notebook was mainly used by Hugo for drawings and sketches, as well as for jotting down bits of verse, quotations and poetry, and it is from this sort of carnet that the present sheet derives. The pages of this small sketchbook were comprised of landscape sketches, marine subjects, taches, automatic drawings of fantastical heads and creatures, lace impressions and rubbings, as well as some scenes at Hauteville House in Guernsey, the home which Hugo had purchased in May 1856.Several of the pages in this 1856 Guernsey sketchbook contain drawings that are the result of experiments with taches, or inkblots, wherein the artist allowed his imagination free rein with whatever form the inkblot took. As Florian Rodari has noted, ‘Either he allowed the tache to expand by itself, modified only by the quantity of water, the quality of the paper and the obstacles it encountered in the course of its haphazard journey; or he guided it deliberately, steering it along paths opened up by chance more or less intentionally in the direction of recognizable forms or suggestive scenes...Most of the manipulations to which Hugo subjected the hazards of the tache resulted in landscapes or figures. Excess water caused the taches to expand, suggesting new solutions, new ways forward for the eye. This is what the artist liked; he would oversee the different possibilities.’ To these inkblots, Hugo would then add lines in pen or pencil, further developing the compositional idea created by the serendipitous flow of ink wash. In the case of the present sheet, the artist seems to have first applied ink to the sheet by rolling a cylindrical object coated with brown ink across the paper. The resulting jagged shapes appear to have suggested the piers of a stone bridge to the artist, who then enhanced the form of the structure with pencil and grey wash. While the bridge itself may have been the result of Hugo’s imaginative transposition of the visual effect of the tache, the overall composition may also have been inspired by the rugged coastline, wooden breakwaters and rock formations of Guernsey, which so often provided the artist with a variety of dramatic motifs for his drawings.Four pages from the same 1856 Guernsey sketchbook as the present sheet are today in the collection of the Musée Victor Hugo in Villequier, while several others are in private collections.

Landscape with a Bridge, Guernsey