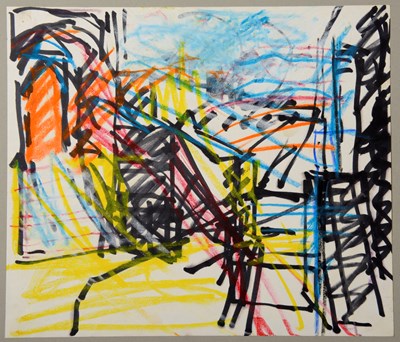 
In the late 1970s and early 1980s, Frank Auerbach painted a number of canvases entitled To the Studios, depicting a view looking downhill towards the entrance to the artist’s studio, between a red-brick Victorian house at the left and a newer building at the right, with a North London skyline at the top of the composition. In his 1990 monograph on the artist, the critic Robert Hughes described Auerbach’s studio at length: ‘a brown cave in north-west London...It is one of a line of three studios in an alley that runs off a street in Camden Town, a rootedly lower-middle-class area between Mornington Crescent and the park of Primrose Hill. They were built around 1900, with high north-facing windows...You enter the alley through a wicket gate, set between a liver-brick Victorian semi-detached villa on the left and on the right a decayed block of 60s maisonettes. A roughly lettered sign says TO THE STUDIOS.’ The advent of the To the Studios paintings, begun in 1977, seem to have been the result of the painter’s anxiety that he would be evicted from his studio; a situation eventually resolved when he was able to purchase the building outright. The present sheet may be related in particular to a series of four paintings entitled To the Studios, painted in 1977 and early 1978; one of these is today in the collection of the Pallant House Gallery in Chichester, while the others are in private collections4. When working on this series of paintings, Auerbach often pinned several drawings and sketches of the subject, similar to the present sheet, to the wall of his studio. This drawing also displays compositional similarities with a later group of To the Studios paintings of 1982, all in private collections.