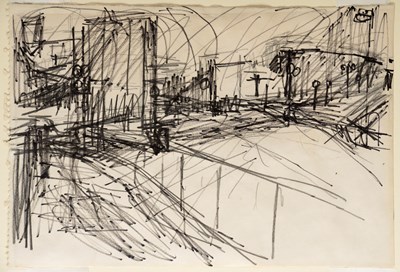 
Throughout his career, most of Frank Auerbach’s urban landscape subjects have been views in the immediate vicinity of his studio in north London; a relatively small area from Camden Town and Mornington Crescent to Primrose Hill. As he noted in a recent interview, ‘I’ve been painting my street and my house, and so on, by the studio because it’s easier, it’s about twenty-five minutes walk to Primrose Hill. Familiarity matters a great deal to me, painting another location wouldn’t mean anything to me.’ Auerbach has returned repeatedly to painting the same, familiar urban views, in different seasons and at different times of day, and indeed sometimes at intervals of several years. Drawings made in a sketchbook on the spot are worked up in the studio into large paintings on canvas or board. As the artist noted, in an interview published in 1998, ‘I’ve been wandering around these streets for so long that I have become attached to them, and as fond of them as people are of their pets. This part of London is my world. I used to travel further for my subjects, to the cinema up the road, to Euston Station and St. Pancras Station. And 40 years ago I worked from building sites at St. Paul’s, in Victoria Street and in Oxford Street. But in those days I would work from five or six drawings; now I get through 200 sketches for a painting.’In its composition, the present sheet relates most closely to a painting of Mornington Crescent of 1969, in a private collection. Mornington Crescent is a curving Georgian terrace, north of Euston Station, where Walter Sickert (one of Auerbach’s artistic heroes) once had a studio. In 1954 Auerbach took over Leon Kossoff’s studio near Mornington Crescent, and he has lived and worked there ever since, for over sixty years.Recently asked if he consciously searches for new landscape compositions around his studio in Camden Town, the artist replied ‘Sometimes when I finish a picture, I just wander around with a sketchbook and ideas and some of them I don’t like. Then I find something that seems attractive...It was very different at the beginning. I was looking for compositions. I know I was. The drawings I did for early paintings seem to me to have a composition, and now...I very much look for things that are not compositions at all, that don’t seem like art. I see whether I can try and paint them, something that for some reason or other is not a fitting material for any particular sort of picture but a piece of undigested reality. I try to find a way of making something of it.’ As Auerbach has stated, in a 1986 interview, ‘It’s the job of painting to capture the wild element in life that hasn’t yet been captured. This is why I paint London because it seems to me that this amazing city, immensely full of chaos and suggestiveness and an atmosphere of its own has largely been painted by visitors, by Monet, Pissarro, Kokoschka, Derain and Doré. The city is full of painters but it’s only been nibbled at. I haven’t painted London to ally myself with some Camden Town Group but simply because I feel London is this raw thing that hasn’t been painted, and for what I feel about London. This extraordinary, marvellously unpainted city where wherever somebody tries to get something going they stop halfway through, and next to it something incongruous occurs...Since London will never be Paris anyway, we might as well get it as rich and varied as we can, this higgledy-piggledy mess of a city.'